Golf tip: How to stop overswing 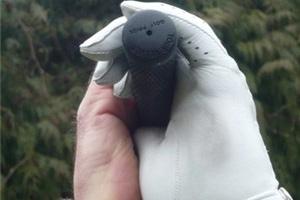 While most of us can swing the club on the correct plane and line on the backswing, if we overswing it becomes increasingly difficult to hit well-timed golf shots. Hitting the ball consistently requires a simple golf swing that is easy to repeat.

By overswinging - the amateur equivalent of that employed by John Daly -  makes the swing much more complicated than it should be.

The two most common causes of an overswing are a) letting go with the left hand at the top of the swing, referred to in the trade as a ‘piccolo grip’, and b) allowing the left arm to collapse and bend.

If we can eliminate both these faults we can build a swing that maintains width on the backswing and is much easier to time consistently at impact.

To avoid letting go with the left hand, slip a tee peg between the grip and the little finger. Consequently, if the fingers lose their hold on the club, the tee will drop out.  It's a simple drill but one that instantly helps the last three fingers of the left hand (for a right-handed golfer) maintain a firm grip of the club throughout the swing.

And to maintain that swing width with an firm left arm a golfer check your flexibility.  If you can easily maintain a straight left arm in a practice swing, then it's merely a matter of discipline and practice to retain in in the actual swing.

Remember, it's common for golfers to swing back too fast and too far which makes loss of control almost inevitable.  Keep the left arm straight by making a shorter slower backswing for much more control at impact. If you're control and timing is good you won't need to overswing.

John Hoskison is attached to the Newbury Golf Centre and plays on the European Seniors Tour.