How do you mark YOUR golf ball? 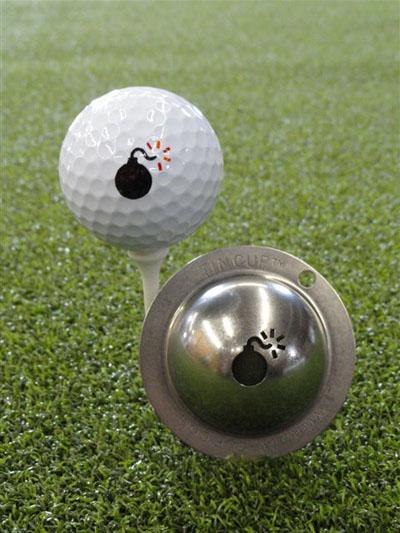 A Golfmagic forum thread about possible cheating - a member claimed an opponent mysteriously 'found' a ball in play that he was convinced had previously been hit out of bounds and lost - brought up the importance of personalising your golf ball.

Remember the rules of golf can be harsh if you don't play by them as one 73-year-old found out recently when he was banned for three years after improving his lie.

If you clearly mark your ball with distinctive dots, lines, your initials or even a smiley face - there can be no dispute that it's yours or look out for unique ways to stamp your golf ball. It's not enough to declare 'it must be mine, it's a Titleist!'

Tour professionals all have their own ways to make their golf balls distinctive and also to line up putts, like Gary Boyd. But being able to identify your ball isn't just for fun. The Rules of Golf recommend it (Rule 6-5 states: 'The responsibility for playing the proper ball rest with the player. Each player should put an identification mark on his ball.')

Play the wrong ball in strokeplay and you’re penalised two strokes; in matchplay you lose the hole. If two players can’t decide whose ball belongs to whom, they must declare them both ‘lost’. I'm always fascinated by the way golfers mark their ball - not only amateurs but professionals. Duffy Waldorf allows his kids to scribble on his, while Ernie Els places two dots under the number. Tiger Woods, Vijay Singh and Brad Faxon are among a growing number who draw a line around the circumference of their ball to help line up putts - a perfectly legal aid.

In recent years I've got into the habit of marking whatever ball I'm using with a red, black or blue line, which extends around the circumference either side of the small lettering that identifies the ball's specifications. Together with a three dots around the number, this not only identifies it as mine but gives me a direction mark on which I want to set the ball rolling when I’m putting or something on which to concentrate at address when I tee it up.

So how do you mark your golf ball? Tell us on the Golfmagic forum thread underneath.