Simon Dyson is a six-time European Tour winner from Manchester, England. He spends countless hours practicing his putting stroke and Golfmagic were lucky enough to catch up with him and get a few tips. 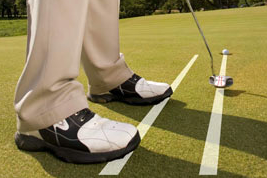 "When it comes to putting, I’ll ask the best players I know for advice. I’m not proud," Simon admits.

"That’s why I walked up to Mark McNulty on the practice putting green at one event because I regard him as one of the best in the world and have admired his putting stroke for years.

"Mark told me that if you’re naturally right-handed put as much of that hand on the club first before adding the left hand and wrapping it round.

"So if you’re right-handed let the right hand dictate the grip, the feel and the direction. It’s common sense if you think about it. I was never sure which hand I placed on the club first but I made a conscious effort to put my right hand on the handle of the putter first and felt an immediate sense of control through my fingers.

"I'm not the best putter on Tour by far but since adopting this method, my putting has certainly improved and at my level that makes one hell of a difference," says Simon.

Simon also revealed that lining up to putt correctly was so important in achieving lower scores.

"Mark (McNulty) told me a very simple philosophy – square up your whole body parallel to the line of your putt, not just the putter face.

"So every time I line up to a putt now I make sure that everything is in line. With my putter face at right angles to that line it's so much easier to take the head back and through on the line on which I'm starting to roll the ball."