Rickie goes traditional from long range, unorthodox for the short ones 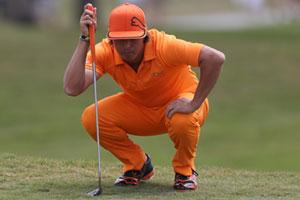 It recently came to our attention during coverage of the Arnold Palmer Invitational at the weekend that Rickie Fowler uses two putting grips when out on the course.

The 23-year-old American, who chased Tiger’s tail for much of the back nine at Bay Hill on Monday only to surrender his chances when dunking two balls in the pond at 16, uses a traditional grip for long putts and a cross-handed grip from short range.

Fowler told Golf Digest: “Sometimes a change like this freshens the mind, but when I saw it on camera I could see the switch was actually improving my stroke, with the putter head staying on line through the impact zone longer.

“All great, but I began missing the feel my old grip gave me on longer putts. So I’ve come up with a strategy that lets me have the best of both worlds.

“If you think your putting needs a shake-up, maybe something like this can work for you.”

From outside of 30-feet, Fowler says he has much better feel with the traditional grip he’s used his entire career.

Inside of that, when he’s really zoning in on the cup, he opts for the unorthodox left-hand-below-right position. What he likes about this grip is the way it naturally positions his right forearm closer to his body than his left forearm.

The new putting regime certainly appears to be working this season as Fowler ranks 26th in strokes gained putting, in comparison to finishing the 2012 season in 135th.

Do you putt left-hand-below-right? If so, why? Share your thoughts in the forum below or tweet us @Golfmagic