LIV Golf or PGA Tour - who would come out on top if they played their very own Ryder Cup-style match? 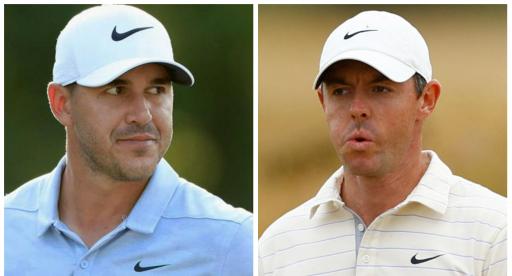 Okay, it's never going to happen (at least not yet), but what would happen if Team LIV Golf led by captain Greg Norman battled Team PGA Tour led by captain Jay Monahan in a Ryder Cup-style match?

The winner of the match gets to do whatever they want in terms of OWGR points, the majors and Ryder Cup eligibility.

We have put together 12 imaginary Sunday Singles matches featuring the players that would be eligible for both sides as it stands (of course much could change over the coming months) to see who would prevail.

The scores are tied at 8-8 following the foursomes and fourballs on Friday and Saturday.

Don't ask why, they just are... if anything to keep this thing fair heading into the final day.

Norman is seen rallying his troops in the team room by telling them: "Look guys, the scores might be level but we have the advantage here since we are the ones who play three-day events."

Talor Gooch nods with approval before telling everyone: "Plus guys, we have already experienced an atmosphere like this in Portland."

So the imaginary draw has just come out, and here are the 12 singles matches.

To keep things fair given it's a three-day event, there will be no shotgun start to Sunday's action.

Of the pick of the ties, Scottie Scheffler clashes with Dustin Johnson in the first match of the day, with Rory McIlroy against Brooks Koepka in game three.

We've also got Jon Rahm up against Bryson DeChambeau, Xander Schauffele taking on Paul Casey and Jordan Spieth tussling with Matt Wolff in the final game of the day.

Agree with our predicted results? Share your thoughts and comments over on the GolfMagic social media channels.