Donald Trump on LIV Golf: "It's been a great thing for Saudi Arabia"

Donald Trump believes LIV Golf has been worth "billions of dollars" in publicity for Saudi Arabia. 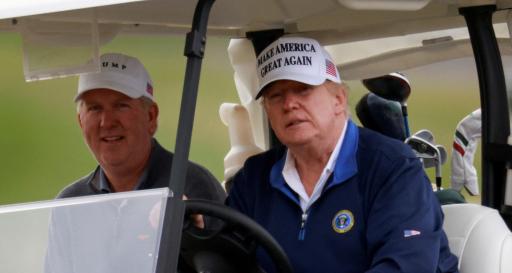 Former United States President Donald Trump believes LIV Golf has been a "great thing for Saudi Arabia" as the circuit heads to Trump's very own golf club in Bedminster for its third tournament of the season.

Trump, who was speaking to Wall Street Journal ahead of the tournament from July 29-31, also thinks you cannot put a price on the publicity Saudi Arabia has received from the LIV Golf Invitational Series.

"I think it's going to be an incredible investment from that standpoint, and that's more valuable than lots of other things because you can't buy that - even with billions of dollars.

Need to know: Which LIV Golf players are competing in Bedminster?

"I do think that the publicity that they've gotten, more than anything, has been a great thing for them.

"I think the publicity they've gotten is worth billions of dollars. It's one of the hottest things to have happened in sports, and sports is a big part of life."

Winners of the 54-hole LIV Golf Invitational Series events receive $4 million for the individual prize, and team winners earn $750,000 each.

Even if you finish last in the tournament, you still walk away with $120,000.

Related: LIV Golf to include promotion and relegation in future events

The controversy surrounding the LIV Golf Invitational Series has been a result of it being financed by Saudi Arabia's Public Investment Fund, which is controlled by Mohammed bin Salman, who was allegedly complicit in the death of journalist and US citizen Jamal Khashoggi in 2018.

Trump was pressed on this topic during his interview with Wall Street Journal this week, and he played down such concerns.

"I can say that from the standpoint of Khashoggi, that has died down so much," said Trump.

"It really seems to have totally died down. Nobody has asked me that question in months."

Trump was also quizzed on what he made of the protests from survivors and family members of those that died in the 9/11 terror attacks in the lead up to the LIV Golf Bedminster tournament at one of his many golf courses. According to reports, 15 of the 19 hijackers were Saudi Arabian citizens.

"I don't know much about the 9/11 families, I don't know what is the relationship to this, and their very strong feelings, and I can understand their feelings," said Trump.