LIV Golf CEO Greg Norman could not help himself ahead of the Presidents Cup. 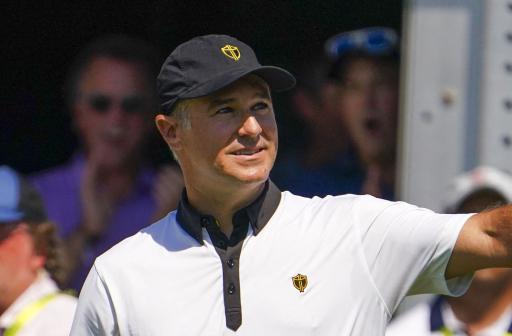 LIV Golf CEO Greg Norman could just not help himself earlier this week as he made sure everyone knew that he was on the only winning International side in Presidents Cup history on Twitter.

Norman recorded 3.5 points from five for the week at Royal Melbourne in 1998 as the Internationals, captained by Peter Thomson, ran out commanding 20.5-11.5 winners over Jack Nicklaus' United States team.

Outside of all this angst - golf is golf, competition is competition; something every golfer thrives on. As a former player & Captain of the International Team, I wish @TrevorImmelman & his entire team the very best in repeating our only 1998 @PresidentsCup success in Melbourne. pic.twitter.com/iwdELJpHfE

On Thursday, Norman tweeted a picture of the victory and offered his best wishes to International captain Trevor Immelman this week.

"Outside of all this angst - golf is golf, competition is competition; something every golfer thrives on," tweeted Norman.

"As a former player & Captain of the International Team, I wish Trevor Immelman and his entire team the very best in repeating out only 1998 Presidents Cup success in Melbourne."

Immelman responded on Friday with: "LOL".

Norman took 3.5 points from five that week, losing his only match in the Sunday Singles to Tiger Woods (1up).

The United States have won 11 of the 13 Presidents Cup matches down the years, with a tie happening in 2003.

Impressively, the United States have never lost a Presidents Cup at home - and things do not look like changing anytime soon.

The Internationals have it all to do this week having lost the opening day foursomes 4-1 to Davis Love's United States side.

Next Page: 9 players who changed their minds about LIV Golf