Collin Morikawa has revealed which LIV Golf Tour player he misses most as the US side dominate the 2022 Presidents Cup at Quail Hollow Club. 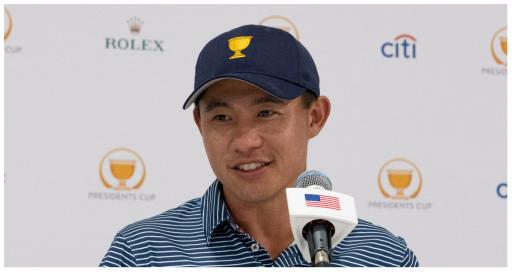 Collin Morikawa has revealed he misses Dustin Johnson the most after he defected to the LIV Golf Invitational Series.

Morikawa is one of four players making his debut for Davis Love III's U.S. side in the 2022 Presidents Cup at Quail Hollow Club.

It's not been the greatest of seasons for the 25-year-old two-time major champion. He's spent the majority of the time swatting away rumours about potentially joining the likes of Bryson DeChambeau, Phil Mickelson and the aforementioned Johnson on the LIV Golf Tour.

When he's not doing that, he's setting social media alight with how he approaches eating cereal.

Morikawa looks somewhat back to his best this week. Towering iron shots have been hit. The fade is back. He's also put a new putter in the bag after changing his grip, going back to a conventional stroke.

He put a point on the board with for the U.S. side playing alongside PGA Tour rookie Cameron Young, beating the pairing of Tom Kim (who can't keep ripping his pants) and K.H. Lee.

Related: Dustin Johnson may have landed himself in hot water with Paulina Gretzky

Morikawa was asked about the potential for a Ryder Cup-style match between 12 LIV Golf players and 12 PGA Tour players.

We should say that PGA Tour commissioner Jay Monahan has re-iterated that this could never happen.

But it does appear that some players have a different opinion on the potential for this kind of match. Morikawa said he hasn't really thought about it.

He's got too many things to worry about, he said, like preparing to marry Katherine Zhu.

Here's the full exchange from the press conference:

COLLIN MORIKAWA: No. To be honest, a lot of those guys, they've gone and they've made the decision, and I really haven't thought about them, and there's a couple of the guys that I definitely miss having around. But it's a -- I think it's just like anything in life, there's a cycle. Golf has a long lifespan. Guys stay for a long time, and there's just a cycle of new guys coming in, old guys coming out. It's a repeating cycle, but it's never anything I've really given thought to because I've got a million other things I've got to worry about, and my wedding.

Q. Who are the guys you miss?

COLLIN MORIKAWA: I miss DJ. I'll be honest. Obviously last year at the Ryder Cup he was amazing, but just -- he's just a good guy to hang around. Him and A.J.