South African Ashleigh Buhai carded a stunning 64 at Muirfield on Saturday to storm into a lengthy lead on the AIG Women's Open leaderboard. 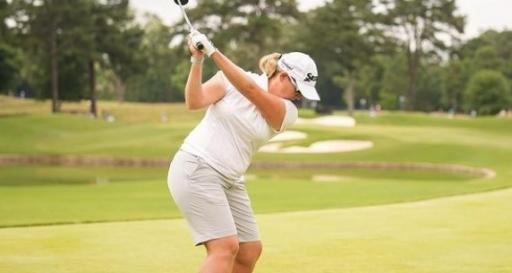 Ashleigh Buhai put together a stunning round of 64 in the third round of the AIG Women's Open to lead by five shots in pursuit of her maiden major title.

Buhai began day three one shot behind the 36-hole leader In Gee Chun and she got off to a hot start with five birdies in her opening seven holes. In the second round, the two-time LET winner went 5-under-par through her opening six holes.

Despite a bogey on her 54th hole in East Lothian, Buhai carded a fantastic round of 7-under-par to lead by five shots from 2019 Women's Open champion Hinako Shibuno.

"Obviously I'm very pleased. To be able to I think shoot that score in those conditions, you have to be able to pat yourself on the back; so much so that I thought I was 6-under, not seven, so I was 8-under playing the last, which I think I have to look back is probably one of the best rounds of golf I've ever played," Buhai said.

This is ridiculous from Ashleigh Buhai.

For the second day running, she is flying on Muirfield's front nine.

"I was feeling pretty calm. I've done good work on my swing with my coach for so long now, and I feel my lines are where they need to be and I just need to keep my tempo. If I keep my tempo, then most of the time it tends to fall. The club tends to fall where it needs to fall.

"I thought I had a really good warmup. Hit a few extra chips today because I didn't feel I chipped too well yesterday, or at least it showed on 17 that that paid off."

Shibuno led by one shot after the first round of the championship, but lost ground with a 73 on Friday. The Japanese Claret Jug holder made six birdies on Saturday in Scotland on her way to a 66.

She is in tied second alongside South Korean In Gee Chun. Chun, a winner of three of the five major tournaments in the women's game, rolled in three birdies for a round of 70.

Evian Championship winner Brooke Henderson is 4-under-par and 10 shots behind the leader, while home favourite Louise Duncan is back in tied 41st place on 1-over-par.