Hinako Shibuno came outright third at the AIG Women's Open at Muirfield last week, but it wasn't just her great golf that caught the eye in East Lothian. 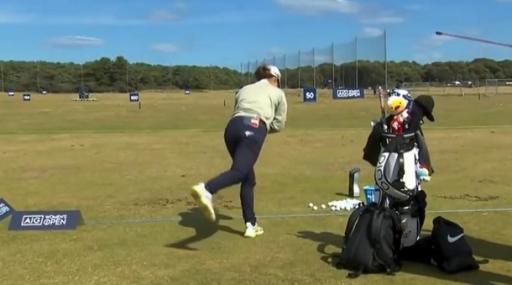 If you are unsure of how to stretch and loosen up before your round, take a leaf from Hinako Shibuno's book and you'll never feel stiff on the golf course again.

Sean Zak of Golf Magazine posted some footage of Shibuno going through her incredibly impressive stretching routine ahead of the final round of the AIG Women's Open.

The 2019 Women's Open champion shows the balance and strength of a world-class athlete to prepare for the last round of the fifth and final major championship of the year.

It was certainly an exciting final round in East Lothain. Ashleigh Buhai began the day with a five-shot lead and she eventually won her maiden major title in a playoff against In Gee Chun.

Shibuno put in another solid display in the AIG Women's Open, finishing in outright third. The 23-year-old won her first and only major title at this event at Woburn in 2019 and she also came tied 34th at Carnoustie in 2021.

Watched Hinako Shibuno do this in person the other day and it literally stopped me in my tracks. Ridiculous flexibility and balance. pic.twitter.com/OvNffnmnfW

Many golf fans were in awe of Shibuno's warm-up routine and some fans left comments on the footage:

"So important for golfers, especially older to constantly stretch the hip joints. Back pain always starts somewhere else and radiates up. If you can stretch your calves, hamstrings and hips and then a few back exercises you can play pain free," one fan commented.

"This type of flexibility “warm-up” exercise is routine in many other sports. This is what real “athleticism” being introduced into golf due (primarily) to #Tiger has wrought," another fan commented.

"Incredible core/glute strength, balance, and hip flexibility. I bet she trains this elevated 3-6 inches off the ground. That's seriously awesome!" One fan said.

"Love the 1 leg drill and stretch!" another fan said.

"I tried this move this morning. Didn’t go as planned," one fan commented.