South Africa's Ashleigh Buhai held her nerve in dramatic playoff to claim her maiden major at the AIG Women's Open at Muirfield. 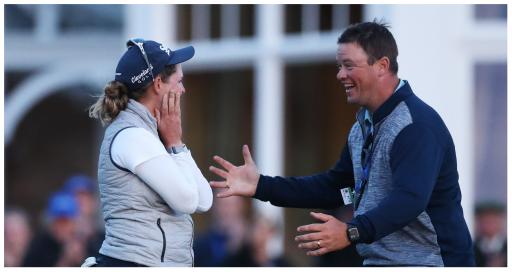 South Africa's Ashleigh Buhai recovered from nearly throwing away the AIG Women's Open to claim her maiden major with a dramatic playoff victory over In Gee Chun at Muirfield.

Buhai started the day with a five stroke lead over South Korea's Chun but found herself in a playoff after 72 holes following a 4-over round of 75.

The 33-year-old saw her lead evaporate after she made a devasting triple bogey at the par-4 15th hole, which saw her drop back to Chun at 10-under.

They could not be separated over the first three playoff holes as each player made par, bogey and another par.

Chun made a clutch up and down at the 18th hole to keep the playoff alive and another putt from 10 feet to extend it again.

But Buhai eventually settled things with an up and down out of the bunker. Chun had sent her tee shot into the sand and failed to equal Buhai.

She said: "I'm a little overwhelmed to be honest. I'm trying to take a breath, but it's obviously fantastic to win this championship, the AIG Women's Open, it's a dream come true.

"I was fairly calm in the playoff. I just tried to focus on what I was doing. I couldn't control anything else. I knew it was going to be tought."

This is what it means! @ash_simon celebrating winning the 2022 AIG Women’s Open. #AIGWO #WorldClass pic.twitter.com/YrgBTTOuOA

Chun is having an impressive season. She won the Women's PGA Championship in June and started well here, making birdie in three of her first nine holes.

Japan's Hinako Shibuno, who also started the day on the same score as Chun, briefly threatened to spoil proceedings for Buhai after she made an early eagle at the fifth hole.

She eventually finished one stroke behind Chun and Buhai. She won this tournament in 2019.

Ireland's Leona Maguire also finished well, shooting 66 to finish at 7-under alongside the Swede Madelene Sagstrom and Australia's Minjee Lee, who won the Women's U.S. Open at Pine Needles.

The impressive young Scot, Louise Duncan, finished at 1-under par. Charley Hull and Georgia Hall, who hit out at the BBC's coverage of the AIG Women's Open, finished at level par.

Next page: Shinkwin with all the feels after claiming Cazoo Open