Nelly Korda could be making her return to golf in a major in a few weeks' time. 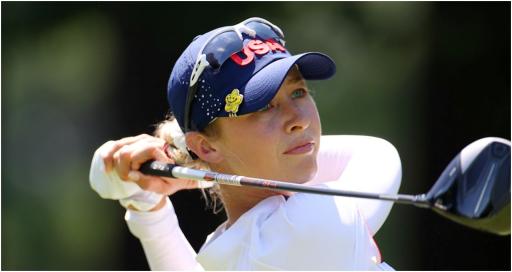 Nelly Korda may have dropped a subtle hint she is about to make her return to the golf world after surgery.

Related: Nelly Korda stripes golf balls on the range ahead of return

Former World No.1 Korda, 23, has been out of action since early March after the discovery of a blood clot.

She posted an image after the surgery to remove the clot and said that it went well before resting up for a few weeks.

Last week she posted a video on her Instagram page hitting some golf balls on the range wearing a compression sleeve on her arm.

Korda is coming off a simply stellar year on the LPGA Tour after winning for Tour events and her first major.

She also won the Olympic gold medal in Tokyo.

She has been listed to speak at the morning press conferences on 31 May ahead of the U.S. Women's Open at Pine Needles Lodge Golf Club.

It would be difficult to imagine Korda turning up to speak without the intentions of playing, but you never know.

Korda, who is six years younger than sister Jessica, has made clear that the U.S. Women's Open is a major that she really wants to capture.

She previously told GolfDigest: "Any major is a major, but the one that holds a significant meaning to me is the U.S. Open."

The major begins on 2 June. Yuka Saso is the defending champion.

Hall of famer Annika Sorenstam is scheduled to play in the major. The last time the Swede played a U.S. Women's Open was in 2008.

Next page: Why this LPGA Tour pro was deliberately missing greens