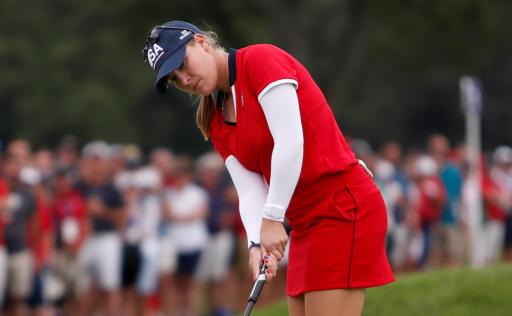 Europe Solheim Cup star Leona Maguire trounced Jennifer Kupcho 5&4 to put a crucial blue point on the board in the Monday Singles - and it's fair to say there was not a great deal of sportsmanship displayed from her US opponent.

Certainly not in the eyes of Justin Rose's long-time caddie Mark Fulcher, who tweeted his disapproval at what he witnessed on the 14th green.

Not the most gracious competitor in defeat is Miss Kupcho …. Disappointing …. But absolutely fantastic stuff by @leona_maguire https://t.co/1pHzzHxadZ

Maguire, ranked 45th in the world, confirmed her status as the Solheim Cup's record rookie points scorer for the week with an incredible four and half points.

Kupcho, ranked 28th in the world, had been unbeaten during the week prior to facing Maguire.

Europe went on to record a memorable 15-13 victory, marking just a second time in the event's history that they have won on American soil - the last of which was back in 2013.

Check out what other golf fans made of Kupcho's reaction to her loss:

I get people get upset losing but….. does it really mean you can’t say “well played” or similar rather than a flying embrace. Crowds were a bit disappointing as well. Especially “get in the hole”

Yes i thought the same from @jenniferkupcho , poor sportsmanship

She looks to be a sore loser Kupcho

Well played in all your games you came to win if you lose shake hands quick hug be polite humble consoling because next time it could be you!!
All the Americans can’t seem to grasp it’s a game rather than a battle hence the pressure builds up either in a nasty scene or a defeat.

As an American its easy to see why so many of us pull for the Europeans in both events, we definitely lack team pride

NEXT PAGE: JON RAHM AND OTHERS CONGRATULATE THE EUROPEAN SOLHEIM CUP SIDE