Jessica Korda revealed on social media that she has seen hurtful tweets after losing to Europe in the Solheim Cup. 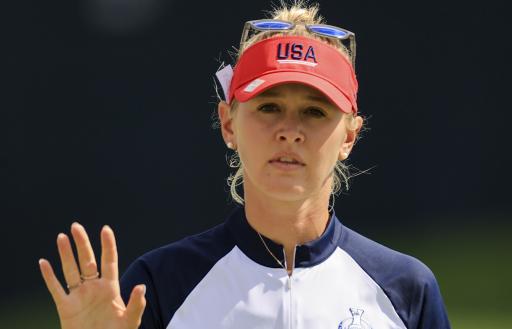 Jessica Korda revealed that she received comments of 'hate' on social media after the United States were beaten by Europe in the Solheim Cup.

Although Korda completed an impressive 3&1 victory against Charley Hull in the Monday singles, it was not enough to turn around the 15-13 scoreline in America's favour.

Her sister and World No. 1 Nelly Korda also secured a point for her side after beating Georgia Hall 1up in the fourth match of the afternoon.

The singles session was drawn 6-6 and the crucial moment came in Matilda Castren's match with Lizette Salas, when the Finn rolled in a nerveless putt on the 18th hole at the Inverness Club to retain the Solheim Cup.

Off the back of the dramatic final day, Jessica Korda took to Twitter and implied that she and her American teammates had received hateful tweets for losing the event.

So much hate on Twitter. Look in the mirror and ask yourself if you’d speak to your loved ones the way you speak to us. Think twice before you tweet. And stop hiding because we can see you. #haveRESPECT

It is not absolutely clear why golf fans were aiming critical tweets towards Korda and her teammates, but we also suspect that the comments were aimed towards the rules controversy of the first day on Saturday.

In the Saturday fourballs, Nelly Korda's eagle putt on the par-5 13th hole stopped on the edge of the hole and hadn't fallen, and looked as though it was well above ground.

Europe's Madelene Sagstrom picked the ball up to give Korda the birdie putt, but an American referee ruled that Sagstrom had not allowed the ball to sit and potentially drop in the cup for the allotted 10 seconds.

Sagstrom had only let it sit for seven seconds, and so the referee awarded Korda and her partner Ally Ewing the hole against Sagstrom and Nanna Koerstz Madsen.

The abuse that Jessica Korda has received, regardless of whether it is linked to her sister's rules controversy or the overall defeat, is very sad to see and is completely unacceptable.

Nonetheless, it was also great to see the support she received off the back of her tweet and many golf fans congratulated her on her efforts in the event.