Bryson DeChambeau reveals WHY he struggled on Thursday at The Masters

Bryson DeChambeau shot an opening-round 76 to finish 4-over-par and 11 shots off the lead. 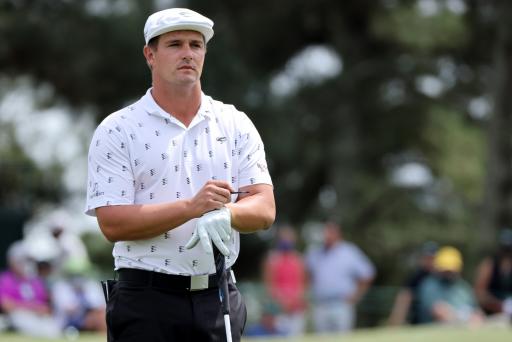 Bryson DeChambeau has revealed the issues he faced at The Masters after his disappointing start in the first round - and they involve a lack of calculations.

On a day where players such as Rory McIlroy, Dustin Johnson and Justin Thomas all finished over par, DeChambeau only made one birdie in his round on the par-5 15th hole en route to a dismal round of 76.

In an honest and detailed interview after his first round, DeChambeau said the slopes and conditions at Augusta National proved difficult to play.

"We just can't calculate and adjust the numbers very well, and the wind is pretty tricky out here. The greens are bouncing pretty hard, and that's what happened.

"The practise green is completely different than the golf course, and that was something that I know, but I just didn't adjust for."

The American's day got off to a poor start on the 4th hole when he hit his tee shot into some bushes by the green of this 240-yard par-3.

He managed to chip out but DeChambeau went on to make a double-bogey and two more bogies followed on the front nine, including on the par-5 8th hole.

The 27-year-old shot level par on the back nine to finish with a 76 which puts him in tied 60th place, 11 shots behind Justin Rose who shot a superb round of 7-under-par.

The man from California made his debut at The Masters in 2016 when he finished in 21st place and this is still the big-hitting American's best finish at the tournament.

DeChambeau has made the cut on each of his appearances at Augusta but he has only shot two rounds below 70 and he will need to buck this trend if he is to avoid missing the cut for the first time.

His second round begins at 3.30 pm in the UK and 10.30 am Eastern time in the US as the American looks to recover from his poor start.