Golf Betting Tips: Why Justin Thomas is the man to beat at The Masters

Golf Betting Tips: The Masters represents the perfect opportunity for Justin Thomas to get back on the major ladder at Augusta National. 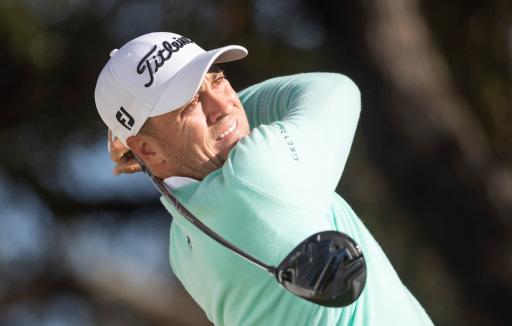 Justin Thomas is the man they all have to beat at The Masters this week, according to GolfMagic's Head of Content Andy Roberts.

GolfMagic is on something of a roll recently with two wins on the PGA Tour in the last month thanks to back-to-back wins for new World No.1 Scottie Scheffler, and Andy is ready to roll the dice with three more selections at golf's first major of the season at Augusta.

Jon Rahm starts a warm 10/1 favourite as he goes in search of his second major title and first Green Jacket, but given his recent poor display on the greens we are more than happy to swerve those odds. Of course, if he does bring his putter then everyone could be in danger.

But here at GolfMagic, we are looking at the next man on the list in Thomas as this year's Masters champion at odds of 14/1.

In need of some golf betting tips for The Masters? Scroll down to see our three best bets at Augusta.

We have also picked two other players at odds of 22/1 and 25/1, who are also going in search of their first Green Jacket.

For those interested in backing Tiger Woods, you could have had 80/1 last week but after his Tuesday press conference where he explained he believed he could win a sixth Masters title against all the odds this week, the bookies have slashed his price into 40/1.

Rory McIlroy is another big storyline this week as he goes in search of completing the career Grand Slam, but we are more than happy to pass on his odds of 20/1 as his game is just really lacking consistency at the moment.

GOLF BETTING TIPS FOR THE MASTERS

JT is our best bet for The Masters as a result of his impressive ability to work the ball both ways - something that will be key to master Augusta National this week. We also like the fact no other player has found more greens in regulation at Augusta over the last four years than Thomas. His putting has been something of a worry of late but we have heard he has been working tirelessly on the greens in recent days and we are confident he will be armed with a hot putter heading into this week. JT is winless since The Players Championship over a year ago now which is another cause for concern, and he has not won a major since the 2017 US PGA Championship. But JT is well overdue to get back on the major ladder and he will have every chance to do just that come Sunday afternoon in our eyes. He even made a big point of this in his Tuesday press conference, citing how he has been working his entire season around the majors and getting his game in the best possible shape for them. JT knows he has underachieved in the majors so far in his career, but he will soon change all of that. Thomas arrives here off the back of eight top-10 finishes in his last 13 starts on the PGA Tour, and he also enjoys Augusta too having finished solo fourth in 2020. JT looks the pick of the betting favourites.

How can you ever write off Brooks Koepka when it comes to the majors? The man lives for them as proven by picking up four majors in the space of a couple of years in 2019. Okay, he's winless in the majors for three years now but he always finds a way to perform in the big tournaments, and we also love the fact his game is trending nicely here with a solid showing at the WGC Match Play two weeks ago. He also has two top-seven finishes at Augusta in the last three years so he has taken to the course well in recent times. His injury no longer appears as much of a concern for him and that is great because he can use distance to his advantage off the tee around here. Brooks has slipped to 17th in the world rankings now which is a slight concern, but as we say, injury has been the big reason for that lately. The signs are there that Brooks' game is returning again, also highlighted by a recent tie for third in Phoenix. At 22/1 at least, it looks a big price for a major man.

Patrick Cantlay will win a major soon and there is every chance it will come this week at Augusta National. Now he's a FedEx Cup champion, the next goal for him is to get on the major ladder. In our eyes, Cantlay is the best player in the game today without a major to his name. He has very few weaknesses in his game, if any, and he is a threat just about everywhere he tees it up in 2022. He has only played in The Masters four times with mixed results comprising two missed cuts, a tie for ninth and a tie for 17th. While those results hardly get pulses racing, Cantlay is a much better player entering this year's tournament. He has been playing nicely of late with four top-10s in his last seven starts on the PGA Tour. Cantlay is well worth a play at 25/1 this week.

Agree with our golf betting tips for The Masters? Who do you fancy to slip on the Green Jacket? Share your thoughts and comments over on the GolfMagic social media channels.