Harrington feels he can win Masters; McIlroy did not know he was playing!

Padraig Harrington believes he can win The Masters this week, but Rory McIlroy did not even realise his fellow Irishman was playing at Augusta! 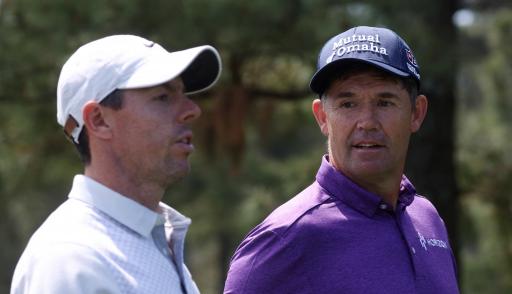 Padraig Harrington has followed in the footsteps of Tiger Woods ahead of The Masters by claiming he also feels confident in himself that he can slip on the Green Jacket come Sunday night.

Harrington, 50, may have won three majors down the years but the Irishman now spends the majority of his career mixing it between the PGA Tour, DP World Tour and over 50s PGA Tour Champions.

Spurred on from seeing Phil Mickelson win the US PGA Championship at the same age last year, an event that Harrington finished tied fourth to qualify for The Masters this week, the 15-time European Tour winner has belief in his game as he enters The Masters for the first time in seven years.

Even if he is ranked 148th in the world right now.

"In my world, I believe I can win," Harrington told RTÉ Sport.

"I'm trying to prepare for Thursday with the attitude that it's going to be a long week. And that I can get myself in position on Sunday where I have a chance of winning this tournament.

"Finishing fourth (at Kiawah Island) was good for me. There's probably something in the back of my head after seeing a 50-year-old win. But I'd like to buck the trend anyway. If a 50-year-old hadn't won, I'd like to be the one to do it. I'm quite contrarian like that, that I want to be the odd one and do it. I'm motivated. I like what I do, I'm clear. I'm here, it's serious. It's business."

Harrington has chalked up four top-10 finishes at The Masters in amongst a handful of missed cuts.

Related: Tiger Woods believes he can win The Masters

"Of course, I could imagine it (winning The Masters)," he added.

"There's no doubt I can imagine it. In my world, that's what's going to happen. The last thing you'd want to do is to get yourself in a position to win the tournament and to be confronted with it and not be prepared with it.

"I have to prepare myself that with nine holes to go, I'm going to have an opportunity and I'm going to take it.

"It always is about getting your head in the right place. Some of that is not overdoing it physically so that you're not mentally tired going out there. It helped being in contention last week. That's the sort of feeling you want. I know it's well within me, I just have to go out and do my thing."

Harrington will be playing in the Par-3 Contest on Wednesday alongside his fellow Irishman Shane Lowry and Northern Ireland's Rory McIlroy.

Only McIlroy has just found out that Harrington was playing in The Masters.

"I actually didn't know Padraig was in the field, which is bad (laughter). But I guess he played pretty well in the PGA last year," said McIlroy.

"Yeah, so it was really good fun. Shane and I and Padraig are going to play on the Par-3 tomorrow as well, so that will be good fun."

Next Page: Rory McIlroy believes missing the cut at the Texas Open last week was "beneficial" to his game