Hideki Matsuyama produced a superb 65 to open up a four-shot lead, but it was the coverage of the event in round three that also got golf fans talking. 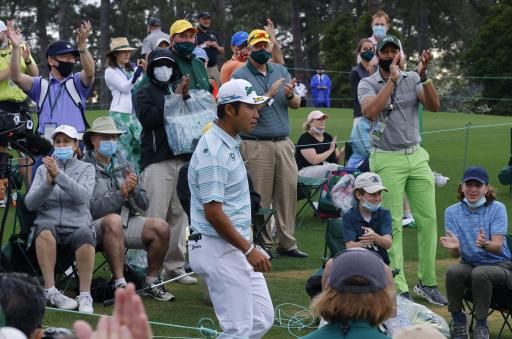 Hideki Matsuyama produced an incredible score of 65 in the third round at The Masters to finish on 11-under-par for the tournament and four shots ahead of the field.

Matsuyama made five birdies and a fantastic eagle on the par-5 15th hole, completing his round without making a bogey to shoot the lowest score of the day.

But during the third round, some golf fans were frustrated at the standard of coverage that they were offered by various broadcasting stations.

They somehow think less is more. Augusta club always play the exclusive. It obviously works for them keeping the intrigue. But masters was always great with still only 4 hours a day coverage back int day eh

I know it's all about the money but I would love more live coverage of the majors in golf, all 4 rounds. #Masters

They missed the shot of the day because they needed to show Butler Cabin pic.twitter.com/gUj1Iwweeg

That Rolex ad honking out “now, more than ever” every 15 minutes of masters coverage is really grinding.

Somebody in the control room at @whnt has completely screwed up @Masters coverage from @CBSSports with multiple local commercials airing in the middle of play.

The main issue appeared to be the number of adverts that were shown during the coverage, which was frustrating for fans who wanted to see the best players in the world play at Augusta National.

Sky Sports provide coverage of The Masters in the UK with a dedicated channel and a variety of viewing options throughout the week, including on all four days of the tournament.

Coverage of The Masters has been offered across a number of different broadcasting stations in America this week, such as Golf Channel, ESPN and CBS.

Hideki Matsuyama will tee off alongside Xander Schauffele in the final group on Sunday at 7.40 pm in the UK and 2.40 pm (Eastern time) in America.

Both Matsuyama and Schauffele have finished in the top five of major championships on multiple occasions and are looking for their first major victory.

Justin Rose led The Masters after two rounds on 7-under-par, but the Englishman remained on that score at the end of the third round on what was a frustrating day for the 2013 US Open Champion.

NEXT PAGE: THE MASTERS 2021: TEE TIMES FOR ROUND FOUR AT AUGUSTA NATIONAL

Previous
The Masters 2021: Tee times for round four at Augusta National
Next
WATCH: What's in Hideki Matsuyama's bag as he wins The Masters