Justin Thomas on his Masters collapse: "It just sucks"

Justin Thomas began the third round at Augusta National just three shots behind Justin Rose, but finished the day well off the pace. 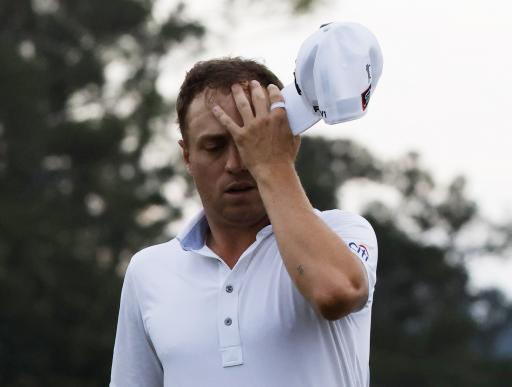 Justin Thomas was tipped by many to go close at The Masters this week and after two rounds, the American was three shots behind the leader Justin Rose and in good shape.

Although he started well on Saturday, Thomas carded a 3-over-par 75 to finish 10 shots behind Hideki Matsuyama and has left himself with a mountain to climb if he is to win the green jacket.

"It just sucks to shoot yourself pretty much out of it in a 10-hole stretch," said Thomas after his disappointing round.

"I just have to forget about it and try to do something historic tomorrow. I just need to go out and try to shoot 10 or 11 under and see where it puts me."

Thomas was level-par for his round after 12 holes, but he made an astonishing triple-bogey eight on the par-5 13th hole which severely dented his chances of challenging Matsuyama.

His wayward drive to the right-hand side meant he had to play short of the green, but he hit his pitch short and into Rae's Creek and it became a nightmare for the 27-year-old.

His subsequent chip on to the putting surface landed a long way from the pin. Thomas then three-putted for a triple-bogey and his chances of Masters glory seemed to slip from his grasp.

"I just chunked it,” Thomas said about his approach which found the water. “I couldn't really lay it up to a number that I wanted to because of the shot I had to hit, and it was fine."

"I even told myself, it's not a good number, just get it past the hole, and I sometimes forget kind of how steep that is, and it being into the grain like that, I wanted to hit it up in the air a little bit, and I probably just got stuck behind it trying to lift it in the air, and I just chunked it."

Thomas played his last five holes in level-par, but he will be wondering what could have been if he hadn't made such a damaging score on the 13th hole.

Thomas will tee off with Australian Cameron Smith when they begin their fourth round at 6.00 pm (BST).

NEXT PAGE: HIDEKI MATSUYAMA: WHAT'S IN THE BAG OF THE LEADER AT THE MASTERS?