Hideki Matsuyama became the first Asian-born golfer to win The Masters after overcoming a late charge by Xander Schauffele at Augusta National. 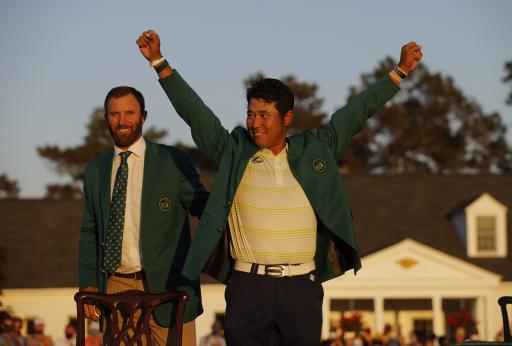 Hideki Matsuyama has won his first major championship at The Masters, carding a final round 73 to win by one shot ahead of tournament debutant Will Zalatoris.

Despite making a couple of mistakes on the back nine on Sunday, Matsuyama became the first Asian-born player to win the green jacket and the first Japanese male to win a major title.

The World No.25 hadn't won on the PGA Tour since the Bridgestone Invitational in 2017, but now Matsuyama can finally call himself a major champion.

"I am really happy," said Matsuyama after his victory.

"My nerves didn't start on the second nine, it was right from the start today and right until the very last putt. I was thinking about them (my family) all the way around and I am really happy that I played well for them.

"Hopefully I will be a pioneer and hopefully many other Japanese players will follow. I am glad to be able to open the floodgates and many more will follow me."

The 29-year-old had a shaky start to his final round as a wayward drive on the first hole led to an opening bogey. Zalatoris, who started the day four shots behind, birdied his first two holes and the lead was briefly reduced to a single shot.

Matsuyama regained control of the tournament with birdies at the 2nd, 8th and 9th holes. He shot 2-under par on the front nine which opened up a four-shot lead over Zalatoris on 13-under-par.

Xander Schauffele began the day four shots behind the leader, but the American distanced himself further with bogeys at the 3rd and 4th holes and a double-bogey at the 5th hole.

As the chasing pack failed to challenge him, Matsuyama remained consistent. He answered a bogey on the 12th hole with a birdie at the 13th and he led the tournament by five strokes.

However, Schauffele burst back into contention with four consecutive birdies from hole 12 to 15, which made for an exciting finish as Matsuyama bogeyed the 15th hole.

Unfortunately for Schauffele, the drama continued on the par-3 16th hole where the World No. 6 found the water with his tee shot and made a triple-bogey six.

Zalatoris battled on and shot 2-under-par to finish on 9-under-par in second place on his debut at The Masters.

Matsuyama saw out the last two holes of the tournament to finish on 10-under-par and secure his first major victory.

NEXT PAGE: HIDEKI MATSUYAMA: WHAT'S IN THE BAG OF THE LEADER AT THE MASTERS?

The Masters
PGA tour
hideki matsuyama
xander schauffele
will zalatoris
Previous
Justin Thomas on his Masters collapse: "It just sucks"
Next
Shane Lowry without regular caddie until The Open due to Covid restrictions

The Masters
Tom Watson joins Nicklaus and Player at The Masters as honorary starter
The Masters
Bryson DeChambeau DELIGHTED to receive official Masters invitation
The Masters
The Masters: Reigning champion Hideki Matsuyama to receive his official invite
The Masters
See who snuck inside the world's top 50 to earn their spots at the 2022 Masters
PGA Tour
Justin Thomas was asked how confident he is of Tiger Woods playing The Masters