Rahm races into contention on day two at The Masters, and burns DeChambeau in the process... 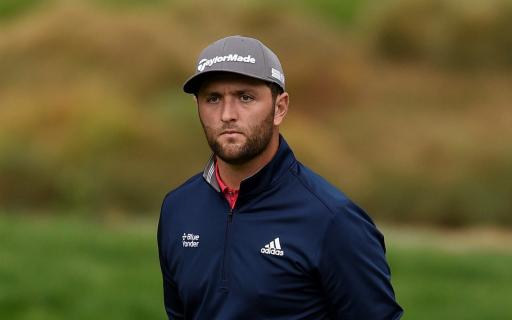 Jon Rahm raced into contention for his first Green Jacket on day two at The Masters, and then BURNED his playing partner Bryson DeChambeau in the process.

Rahm, who moved to 8-under par for the tournament after just 12 holes before play was suspended due to darkness on Friday evening, was questioned about whether or not he was involved in the search for DeChambeau's "lost ball" on the par-4 3rd hole.

"Which one?" replied Rahm.

DeChambeau ripped a drive just left of the green but nobody could find his ball in the rough and so he had to head back to the tee in a golf cart to play three from the tee. He then proceeded to hit a drive in the exact same spot, but this time his ball was located.

It would, however, lead to a triple-bogey seven and drop the American well out of contention.

"On three, yeah, we were involved in the search. I know they found it afterwards, but we must have been close. I mean, when you have Bryson hitting it as hard as he hits it, it's kind of hooking with not much spin into a soft area, that ball was - we were all confident it was pretty buried and it was going to be hard to find.

"It's unfortunate that the rules of golf don't let you kind of figure out it's somewhere there and keep playing, and he had to re‑tee, and I know that affected him a little bit because he didn't play his best golf after that. But he's a fighter and he's showing it. It was just unfortunate."

Rahm and DeChambeau will resume play on the 13th hole on Saturday morning, with the Spaniard returning for a five-foot putt for birdie that would take him into a tie for the lead on 9-under par should he convert.

DeChambeau will return to the 13th hole on Saturday with a 17-footer for eagle, but at 1-over par for the tournament the reigning US Open champion has it all to do from there if he is to make it consecutive major titles.

Heading into this week, DeChambeau - who had been sending bombs off the tee in practice - claimed Augusta National was like "par-67" for him.

Abraham Ancer, Cameron Smith, Dustin Johnson and Justin Thomas are all finished on 9-under par after 36 holes.

Louis Oosthuizen, who is also playing alongside Rahm and DeChambeau, is another player in contention and he will return on Saturday with a six-foot birdie putt at the 12th that would move him to 8-under par.

Other players high up the board include in-form duo Patrick Cantlay, who is finished on 8-under par, and Hideki Matsuyama, who finds himself at 8-under par with three holes remaining of his second round.

Tiger Woods is still to complete his second round, and he will do so on Saturday at 4-under par thru 10 holes.