Justin Rose leads The Masters after stunning round of 65 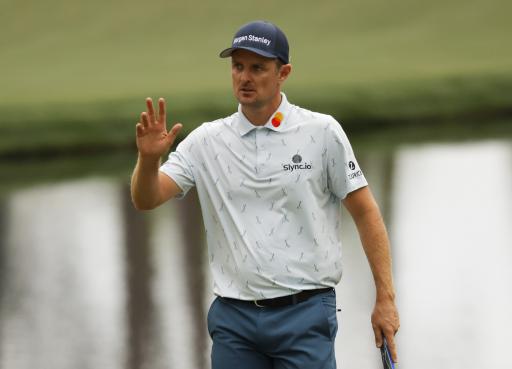 England's Justin Rose marched into a four-shot lead on day one of The Masters after a blistering round of 65, which saw him play the final 11 holes in 9-under par at Augusta National.

Rose, 40, started his round slowly with bogeys at the 1st and 7th but he then turned it all around with an eagle at the par-5 8th followed by a birdie at the par-4 9th to go out in 1-under par.

Justin Rose is now five under following birdie at the par-5 No. 15. #themasters pic.twitter.com/dTsQiKT6G1

The 2013 US Open champion then added another birdie at the par-4 10th, before adding five more birdies on his next six holes to vault his way to 7-under par and four shots clear of the chasing pack.

Rose entered this week searching for some form, having slipped down the world rankings to a current 41st position.

The former World No.1's last victory on the PGA Tour came back in January 2019 at the Farmers Insurance Open.

Despite a tie for second at the Saudi International earlier this season, Rose finished tied 54th at the WGC-Workday Championship and he then withdrew from the Arnold Palmer Invitational at Bay Hill through injury.

But returning to hallowed Georgia turf where Rose has enjoyed tremendous results in the past, highlighted by a tie for second in 2015 and an agonising playoff loss to Sergio Garcia in 2017, and the Englishman would appear to have finally rediscovered his form.

Brian Harman and Hideki Matsuyama are in a tie for second on 3-under par, with Webb Simpson, Will Zalatoris, Christiaan Bezuidenhout and 2018 Masters champion Patrick Reed on 2-under par.

Of some of the selected others, Jordan Spieth carded a rollercoaster round of 1-under par, Jon Rahm finished level-par just days after the birth of his first child, defending champion Dustin Johnson double-bogeyed the 18th to finish 2-over par, and Rory McIlroy slumped to 4-over par.