Rory McIlroy HITS HIS DAD with errant shot at The Masters

McIlroy strikes his dad with his second shot into the 7th hole en route to a dismal round of 4-over 76 at The Masters... 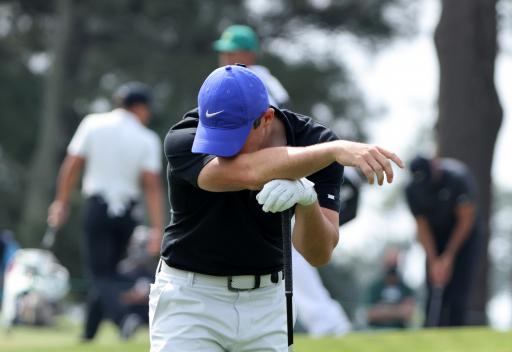 Rory McIlroy struck his father Gerry full toss with his approach shot into the par-4 7th en route to carding a lacklustre opening round of 4-over 76 at The Masters.

McIlroy, who is bidding to complete golf's career grand slam at Augusta National, opened with four pars before stringing three consecutive bogeys together, the last of which saw him strike his dad with his second shot.

Rory McIlroy hit his dad with an errant approach shot on No. 7 during the first round of #theMasters pic.twitter.com/uEle8iqeyR

The four-time major champion rallied with a birdie at the par-5 8th but then handed another bogey back straight away at the par-4 9th to go out in 39 strokes.

McIlroy's struggles continued around the turn with a bogey at the tricky par-4 11th and he then found water with his approach shot into the par-5 13th en route to a sixth bogey of the day.

The Northern Irishman pulled a shot back at the par-5 15th and then made three pars into the clubhouse to come home in 37 strokes and a round of 4-over 76.

During a press conference ahead of this week's event at Augusta National, McIlroy revealed that he was reminded of the importance of golf's four majors after visiting Woods at his home in Florida.

"I went over to Tiger's house a few weeks ago and in his family room he's got his 15 major trophies and I said, 'That's really cool, where are all the others?"' McIlroy said.

"That's all he cared about [winning majors], so how easy must that have felt for him to win all the others? He talked about these are the four weeks that matter, so the weeks that didn't matter he racked them up at a pretty fast clip.

"If all he cared about was four weeks a year, the other stuff must have just been like practice. That's a cool perspective to have, right? That's all I could think about on the way home - and I was glad he was okay too!"

McIlroy may have four majors to his name but his last now dates back to the 2014 US PGA Championship.

Previous
Golfer uses wedge to SCOOP the ball towards the hole, but what's the ruling?
Next
Justin Rose leads The Masters after stunning round of 65

PGA Tour
Patrick Reed: What's in the bag of the World No. 7 in 2021?
PGA Tour
Rory McIlroy SURGES up the leaderboard on day two at Wells Fargo Championship
News
Golf reporter gets "A LOT OF HEAT" for interview with Patrick Reed
PGA Tour
Rickie Fowler provides Tiger Woods update after watching The Masters together
PGA Tour
Rory McIlroy plummets to his WORST world ranking since 2009