The Masters: Will Augusta National be any different in November?

What can we expect from the greenkeepers in Augusta this month? 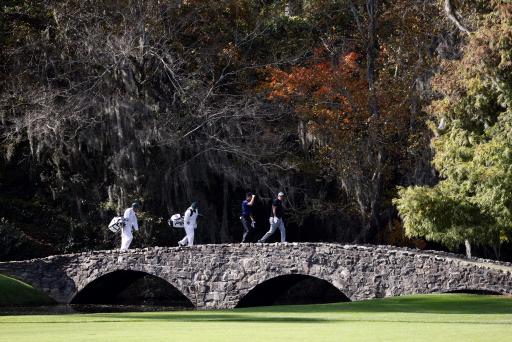 In this most topsy‑turvy of years it’s fitting that the US Masters, so often the start of the golfing season, is taking place this November, writes BIGGA's Karl Hansell.

While The Open was cancelled, the shuffling of the golf calendar saw the US Masters rescheduled to this month. That means the experience for Golf Course Superintendent Brad Owen and the team of greenkeepers will inevitably be very different to hosting the event during the traditional April timing.

Those working on the tournament in a greenkeeping capacity remain tight‑lipped about life at 2604 Washington Road, so Greenkeeper International spoke to a superintendent who grew up in Augusta and can provide an insight into what’s going on behind the scenes of Bobby Jones’ club.

Rhett Baker, pictured above, is the course superintendent at Ohoopee Golf Club in Cobbtown, Georgia, about 100 miles south of Augusta. He grew up within several miles of the club and has lived in Augusta most of his life. He also worked at three Masters tournaments, including an 11‑month stint on the maintenance staff in 1998.

He’s been a caddie, has attended every tournament since 1974 and has played the course more than 20 times.

"Augusta and surrounding areas fully embrace The Masters tournament and there is an excitement in the air each spring that you can almost feel," said Rhett.

"The tournament and the Augusta National Golf Club obviously have a huge positive financial impact on the community. It is always a very exciting time of the year.

"I have been fortunate to have played a lot of great golf courses, but there is nothing that compares to Augusta National. The scale of the property, the changes in elevation and how the holes are perfectly routed across it and the incredible greens complexes are major factors in what separates it from other places.

"Although maybe not quite as much now the fairways have been tightened and more trees have been added, the course demands precision on every shot while also allowing for various options of how it is to be played. Options always create interest, which increases the fun in my opinion."

Augusta’s high temperatures are on average 10 degrees lower in November than April, but this being Georgia, that means the temperature ranges from 15 to 25°C, so won’t exactly be unpleasant.

“There is no typical weather pattern for November,” explained Rhett. “It could be sunny or rainy, hot or cold or something in the middle. What I can tell you is that the maintenance staff at Augusta is possibly the most capable group in the entire business. I have no doubt that this tournament will appear to work and run flawlessly, no matter what Mother Nature throws at them.”

A major change that we can expect to see is the transition of the fairways from the bermudagrass played on during April to cooler‑season ryegrass. Startling aerial images shared on social media this summer show the turf coloured brown, but Rhett explained why that’s nothing to worry about.

"Summers are tough in Augusta, but not necessarily debilitating," said Rhett.

"There are some good aerial pictures floating around the internet now, showing the course being tan a few weeks ago and now back to green. This is not weather‑related, but is just part of the overseeding process.

"The course has a bermudagrass base, except for the greens, which are bentgrass. The bermudagrass loves heat and will only turn brown when there is a lack of water, which is not a problem Augusta National has!"

Prior to overseeding, which is usually performed in September, the existing turf is prepared by aggressive verticutting and scalping. The ryegrass usually germinates after three to seven days of heavy watering and warm temperatures, immediately turning things green again.

Rhett explained: "By the time the club opens sometime in October, the bermudagrass will have recovered and will be competing with the new ryegrass plants. The ryegrass, being a cool season plant, will have the advantage by this time of year and will start to take over as we get through fall and into winter.

"The ryegrass plant will not be fully mature and does not experience its best growth until late winter and early spring, but the existing bermudagrass will still be in place and green so I expect there to not be much visual difference of the turf between a fall tournament and a spring one.

"The course, not including the greens, usually plays longer and slower in the fall as the club will keep the turf’s moisture level above normal in order to help the ryegrass grow. But I expect them to reach a point where they have to accept the mixture of ryegrass and bermudagrass they have and will turn their focus to reducing their moisture so as to be as firm and dry as possible for the tournament."

Rhett explained how the course may look different only if there is a very early, heavy frost that would cause the bermudagrass to lose some of its colour, although he added this is highly unlikely.

"They have the resources necessary to prepare the course perfectly for the tournament and handle any unforeseen events that may arise," said Rhett. "I think they have in the neighbourhood of 40 to 55 regular employees and another group of volunteers.

"I know Brad Owen and he’s a great guy. He’s got a great combination of smarts, work ethic and communication skills. He’s also approaching 40 years at the club, so he’s got many, many years of experience.

"It would be easy to assume that because he has all the resources needed that it can’t be too difficult of a position. The flip side is that anything less than perfection is never an option."

Augusta National was carved out of the 365‑acre Fruitland Nursery, renowned in the 19th Century for having a wide variety of fruit and imported ornamental plants.

The spectacular azaleas are a highlight of the Masters experience, but we shouldn’t expect them to see them flowering in November, although there is a slim chance if they are of the type known as encore azaleas, which bloom three times each year.

Among the trees, the Japanese maples and redbud trees will have turned yellow, giving a very autumnal appearance.

"I don’t expect to see many blooms, unless the camellias start," said Rhett.

"They’re definitely geared for a spring bloom. There will be lots of green from the azaleas and some colour from changing tree leaves, although most of the trees are evergreen pines. There may be a surprise, though!"

What’s certain is the days will be shorter, with around 2.5 hours less daylight and the sun setting at 5.24 Eastern Time on the final day’s play. With a field of 96, there will be at least 11 hours of daylight so they shouldn’t have any problem getting around the course.

Ohoopee has many similarities to Augusta in that it is a somewhat exclusive club where members primarily play from autumn through to spring. Its two 18‑hole courses are designed as inland links with large, undulating greens, forgiving fairway width and built without much manipulation of the existing terrain, whereas Augusta has evolved a great deal since its creation in 1933.

When the COVID‑19 pandemic hit, the club closed for several weeks, but has slowly returned to regular operations.

Rhett said: "The biggest thing for the Masters will be the lack of spectators, which will have a tremendous effect and will be quite sad, I think."

This year we’ve gotten used to a new experience when it comes to spectator sports and the US Masters will be no different. With no crowds, however, we should get a once‑in‑a‑lifetime look at the landscape of Augusta National during November.

This article first appeared in Greenkeeper International, the monthly journal for members of BIGGA.