Xander Schauffele on Masters agony: "I might be tossing and turning" 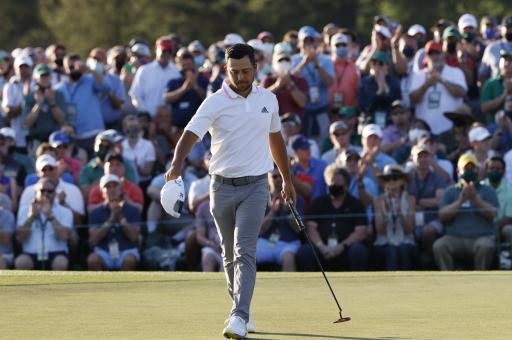 Xander Schauffele admits he will likely be "tossing and turning" in bed this evening after throwing away his chance of a first Masters title with a triple-bogey six on the par-3 16th in the final round at Augusta National.

The four-time PGA Tour champion, to his credit, rallied with four birdies in a row from the par-3 12th to move within two shots of the lead when Matsuyama bogeyed the par-5 15th, but that was as close as Schauffele would come as his hopes soon sunk on the par-3 16th when coming up short in the water.

"I hit a perfect 8 iron," said Schauffele, who ended up finishing tied third on 7-under par and three shots behind eventual winner and playing partner Matsuyama.

"The wind was into us, left to right. It got smoked and eaten up. You could kind of see it. The ball hovered there."

Schauffele then took his drop in front of the tee box and then cleared a 9-iron straight over the green en route to a six to hand the tournament to Matsuyama.

"It seemed like it went downwind almost. (caddie) Austin (Kaiser) and I just kind of painfully laughed at each other and said, ‘Well, I guess it switched again.'"

He added: "I think a lot of great shots into 16 are left to right. High cuts into that mound. I’ve been hitting a good high cut all week. I just didn’t think of it at that time. I hit like a hard draw 8-iron, and it wasn’t the shot. Moving forward, just kind of throw it in the memory bank. I’m going to keep collecting thoughts.  Hopefully, I keep coming back here for years to come, and the goal is to win one day.

"I’ll be able to sleep tonight. I might be tossing and turning, but I’ll be OK."

Schauffele, who finished tied second behind Tiger Woods at The Masters in 2019, has now finished in the top-10 eight times in the majors since 2017.