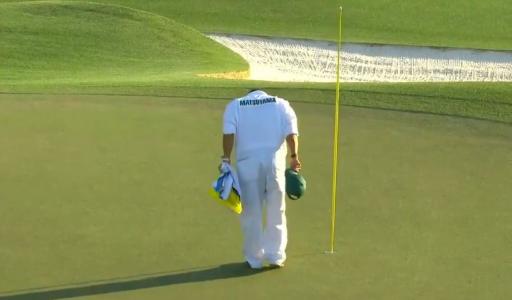 Golf fans around the world are in awe of Hideki Matsuyama's caddie Shota Hayafuji, who removed his hat and bowed to Augusta National after Sunday's final round.

Matsuyama made history by becoming the first Asian-born golfer to win The Masters and the 29-year-old hopes to see more Japanese players follow suit in the future.

"I am really happy," said Matsuyama after his victory.

"My nerves didn't start on the second nine, it was right from the start today and right until the very last putt. I was thinking about them (my family) all the way around and I am really happy that I played well for them.

"Hopefully I will be a pioneer and hopefully many other Japanese players will follow. I am glad to be able to open the floodgates and many more will follow me."

Although Matsuyama's name made the headlines on Monday morning, it was his caddie Hayafuji who won the hearts of golf fans watching The Masters from all over the world with his touching and respectful gesture to the most famous course in golf.

Following Hideki Matsuyama's Masters win, his caddie, Shota Hayafuji, bowed to the course after returning the pin on the 18th hole. #themasters pic.twitter.com/gdLsWSC0Ac

It didn't take long for Hayafuji's name to start trending on social media, with fans and professional golfers all taking to Twitter to applaud the caddie for such a respectful tribute following Matsuyama's victory.

"The Japanese are such dignified, respectful people. They respect their elders, their families, their traditions and customs, their opponents, each other and nature itself. I was so happy to see Hideki Matsuyama win the Masters," said one golf fan in response to the clip on Twitter.

"Honor and Respect are engrained in Japanese culture. Having served in the military I am so fortunate to have visited the country several times and have known their soldiers to be some of the finest in the world," said another.

A sign of respect when Hideki Matsuyama’s caddie Shota Hayafuji bowed to Augusta National prior to leaving the 18th green on Sunday. A gesture that will go viral and hopefully we all can appreciate the meaning of it. pic.twitter.com/66pUzWeOVI

Matsuyama’s caddie bowing to Augusta after winning the masters might just be the best celebration ever.....

NEXT PAGE: How much Hideki Matsuyama and every player won at The Masters