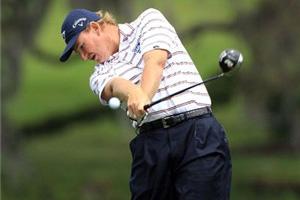 The odds on Ernie Els claiming his first green jacket at the US Masters and raining on Tiger Woods' parade, tumbled dramatically when he claimed his second consecutive victory on the PGA Tour in a weather-delayed finished to the Arnold Palmer Invitational at Bay Hill.

Some pundits claimed his victory at Doral last week bordered on a fluke but the South African identified his introduction of the latest Callaway FT-Tour driver, combined with the Callaway Tour i(s) ball, were keys to his back-to-back victories.

After rain washed out the last four holes on Sunday, Els returned on Monday with a slender lead and thanks to his superb short game, held off the challenges of Kevin Na and Eduardo Molinari to win with an 11-under par total.

With his the 18th PGA title he served notice that he will be a man to contend with at Augusta from April 8-11.

It was the fourth consecutive win on the PGA Tour for the FT Tour driver and the fourth win for Callaway Tour i Series balls in 2010.

Els put the driver in play two weeks earlier at the WGC-CA Championship and it immediately helped him to No.1 in scoring averages on Tour with at 68.88 per round, compared to 70.21 (28th) in 2009.

"You could see I made hard work of it, but that new Tour i(s) ball really helped me so much with my short game,” Els said. “I was able to get it up-and-down, and that was what won the tournament for me.”

“I think if you're a betting man you would have got really good odds anywhere in the world that  I would win two tournaments in a row,” Els said. " A lot of guys have written me off, and a lot of guys probably said it was a fluke in Miami. It was hard work this week, but two wins is definitely special and I'll just keep working hard. There are still a lot of flaws in my game that I've got to figure out and get right. I know I'm never going to play the game perfectly, but I can improve.”