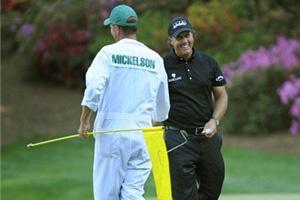 Only a handful of people were aware of the drama surrounding the driver Phil Mickelson used to claim his third green jacket.

The left-hander spotted a crack in the crown of his Callaway FT Tour driver after playing the Shell Houston Open the week before and was concerned he'd have to test a replacement.

The odds of a fracture become more likely, as clubs get lighter and when positioning weight more effectively in the head becomes more crucial. Most Tour pros have several back-ups, but they never feel quite the same as the original.

Dr. Alan Hocknell, Callaway's British-born senior vice president of research and development explained what happened: "Phil has a backup FT Tour driver with the same specs, but he loves the one he uses in tournament play. We decided to remove the carbon composite body from the face and we've never done that before, so everyone was a bit nervous."

The club was flown from Houston to San Diego on Monday of Masters week, while . Mickelson was en route to Augusta National and the R&D team took the body and clubface apart without removing the shaft so that the loft and lie would be unchanged.

"How bad is it, Doc? Is she gonna make it?" a worried Mickelson texted Hocknell after arriving in Georgia and Hocknell was able to put his mind at rest.

Callaway engineers bonded a new carbon composite body to the titanium face and then re-attached the sole plate. Within hours, the driver was on its way to be re-united with Mickelson and a Callaway Tour rep picked up the club on Tuesday morning and delivered it to Mickelson on the eighth tee of his practice round.

"The driver played just like I hoped, with the same great feel," said Mickelson, who averaged 297.12 yards off the tee on the way to winning his fifth major. "It feels identical to the way it was before."

Commented a relieved Hocknell: "It's great to be able to show our team's capabilities, react quickly and do something to a very high level of performance.
As the driver was going out the door, we looked around at each other and said, 'Imagine if he wins ... '."

Sergio Garcia, meanwhile, put TaylorMade's latest R9 SuperDeep driver into his bag -the first week it was available for on Tour. Kenny Perry used one in practice but decided to delay using it in competition.