The centre is opened in Kolner, Germany, infront of 300 spectators 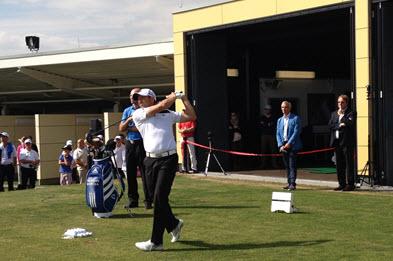 In front of a crowd of more than 300 golfers, Garcia emphasised the importance of seeking efficiency throughout his bag and the benefits of being custom fitted for golf clubs, in particular using TaylorMade’s MAT-T System featured at the TaylorMade Performance Lab.

This is the most technological advanced fitting system available and the MAT-T 3D motion capture technology enables players to analyse every aspect of their equipment and swing in detail.

During the session, Sergio was interviewed by Liam McDougall (TaylorMade Performance Lab Manager Europe) and also answered questions from the audience.

The Ryder Cup star also discussed other areas of his game and equipment, including the benefit he has gained from Lofting Up his SLDR driver from 8.5 to 9.5 degrees and the speed pocket technology in his Tour Preferred irons.

Sean Brady, Head of TaylorMade Brand Experience, said: “It is both an honour and a privilege for TaylorMade-adidas Golf to be part of such a successful partnership. The TaylorMade Performance Lab at the Kölner Golf Club allow golfers of all abilities to unlock their true golfing potential”.

The lab is now available for bookings by visiting or find out more information about any of the other TaylorMade fitting venues across Europe.