In the Bag: Bubba Watson

We delve into The Masters champion's bag 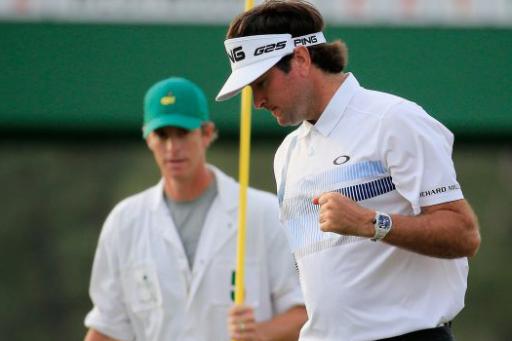 BUBBA WATSON slipped on his second green jacket in three years with a commanding three-shot victory at The Masters last night.

Watson hates changing equipment, so much so he only upgraded to the S55s from his S59s that he had used since 2004 at the BMW Championship around six months ago.

The two-time Masters champion originally tested the S55s at his Orlando home but felt he was hooking the ball with them too much. After a quick session with PING’s tour reps, who flattened the lie angle on his irons 1-degree, the problem was soon alleviated and the irons went straight in the bag.

Other interesting notes about his iron set in 3-PW, is that they're plus one half inch in length, the 3-, 4- and 5-irons have an extreme heel grind and he has massively oversized grips with ten wraps of tape on the top and 12 on the bottom.

Watson's pink G25 driver, which he used to find 40 of 56 fairways at Augusta National and average a supreme 305-yard average, is unique in the sense it features the new racing stripe found on PING's latest i25 driver. His shaft is also a True Temper Graffaloy BiMatrx, which like his previous irons, has been installed since 2004.

Although his wedges are standard, his putter - a Ping Anser Milled 1 - features a rainbow-like finish that Watson originally saw while visiting PING a few years back. The putter is 34.5 inches long with 3 degrees loft.