In the bag: Curtis, Grace, Westwood

Titleist, Callaway and PING in this weekend 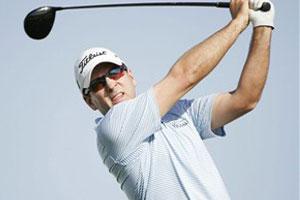 Titleist staffer Ben Curtis praised the state of his short game as the defining factor behind his first PGA Tour victory in six years.

The 2003 Open champion, who claimed his fourth career title with a two-shot triumph at the Texas Open, trusted a full bag of Titleist equipment including the Titleist 910D3 driver, 712 AP1 irons and Vokey Design wedges.

“Every part of my game came together this week,” said Curtis, who ranked first in greens in regulation at TPC San Antonio on 68.1%, as well as second in driving accuracy with 73.2%.

“I’ve been hitting it pretty well all year and was finally able to put the short game in there as well. That was the huge difference.”

Curtis, who strode across the finish line wearing FJ DryJoys Tour shoes and the FJ StaSof glove, also caught fire on the greens averaging 27.3 putts a round and ranking third in strokes-gained putting on 2.061.

But of all his putts holed in Texas, it was the par save on the penultimate that meant the most.

Curtis, owning a one-shot on the short par-4 17th, bladed his approach shot with a wedge over the green and then chipped over a mound and onto the edge of the green some 22-feet away.

“That was big,” added the 34-year-old from Ohio. “My second shot was sitting in an old divot and I bladed it over the green. That was the worse place to go and the third shot was probably the hardest I had all week.

“I was just trying to get it down there somewhere on the right level to give myself a good look. It was the best putt I hit all week and at just the right time.”

On the European Tour, Callaway staffer Branden Grace became just the second Q-School grad to win three times in one season on the European Tour the year after graduating, following a three-shot victory at the China Open.

The 23-year-old South African, who holds a 33% winning strike rate this season, ranked fifth in driving distance when crushing his Callaway RAZR Fit driver to an average of 301.4 yards and third in greens in regulation with a stunning 86.1% sporting his Callaway X-Forged irons.

In Asia, PING staffer Lee Westwood defended his Indonesian Masters crown by two strokes on 16-under.

The World No.3, in customary Westwood-like fashion, found 82% of the greens in regulation at Royale Jakarta. He also looked happier on the greens, averaging 29.75 putts per round with his PING Redwood Anser.

What’s in the winners’ bags