In the Bag: Stephen Gallacher 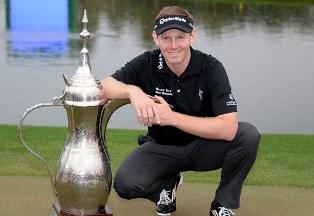 STEPHEN GALLACHER became the first player to succesfully defend the Dubai Desert Classic yesterday - a tournament celebrating its 25th anniversary - with a one-shot victory at the Emirates Golf Club.

The 39-year-old Scot, who raced into a two-shot lead following a scintillating Saturday 63, overcame a front-nine wobble on Sunday to record his European Tour hat-trick of wins.

Gallacher bogeyed the first two holes and dropped further shots on the sixth and eighth to fall two off the pace but bounced back superbly with birdies on 11, 13, 16 and 17 to finish one clear of Argentina's Emiliano Grillo on 16-under.

“I never do anything easy I'm afraid,” said the TaylorMade staff player who moves into the top 40 of the world rankings for the first time in his career.

“What a day – my emotions are gone.

“I never really played the front nine that well all week. I don't know, it was a carbon copy of yesterday apart from I holed a couple of putts for par and got a bit lucky yesterday but today I was in bushes and trees and stuff.

“I just kept saying to myself, ‘stay patient’. I played the back nine well and no one was really running away with it at the time.

“To win it on the 25th anniversary, it was a good field with all the champions playing, makes it even more special.”

Gallacher, who previously played a 9-degree R1, lofted up to 11-degree with his new SLDR driver and finished in the top-10 for total driving distance this week. Gallacher was also one of 28 players who played the SLDR, making it the No. 1 driver model in the event.