In the Bag: Kevin Stadler 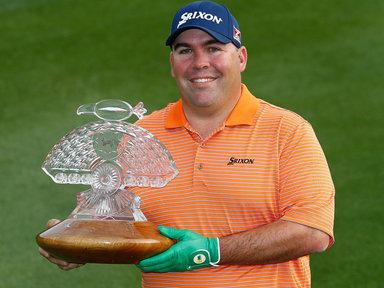 The 33-year-old American, who won on the European Tour back in 2006 at the Johnnie Walker Classic, carded a final-round 68 to prevail by one shot over Bubba Watson and Graham DeLaet on 16-under.

Starting the final round two shots off the pace, Stadler reeled off three birdies in a row from the first to join Watson out in front and when rolling home a fourth at the ninth.

A disastrous double-bogey at the 11th and several short missed putts midway through the back nine looked to have ended the Baby Walrus' charge but he bounced back superbly with a decisive two-putt birdie from 80-feet at the short par-4 17th.

Here's a closer look at what was in the Baby Walrus' bag...

Golf Betting Tips: Jordan Spieth to do the double at Charles Schwab?
Peter Millar have an AMAZING selection of golf shorts!
Andy Roberts
kevin stadler
in the bag
Cleveland golf
Srixon
Previous
In the Bag: Stephen Gallacher
Next
Wozniacki to blame for McIlroy's meltdown in Dubai