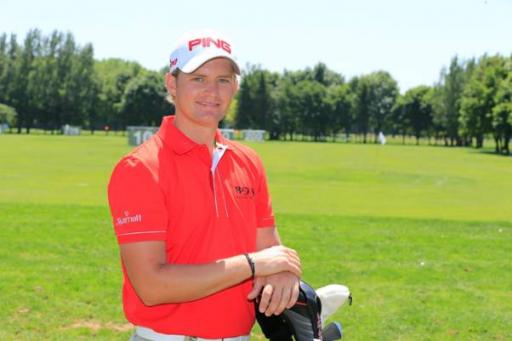 Under the terms of the arrangement, the former Walker Cup player will wear the Marriott logo on his sleeve and will represent the renowned hotel group on his travels around the world.

The agreement further underlines Marriott’s commitment to the game of golf, and on Tour, Lewis’ performances and personal attributes will continue to reflect the quality of the hotelier’s golf offering worldwide.

Marriott hold 11 Championship venues across the UK alone, and the affiliation with Tom Lewis provides yet further evidence of the brand’s on-going investment in the game.

Lewis first shot to prominence when he won the British Boys Championship in 2009 but is best remembered for carding a stunning 65 in the first round of the 2011 Open at Royal St George’s - the lowest 18-hole score ever recorded by an amateur at The Open. He also went on to win the Silver Medal.

The 22-year-old from Welwyn Garden City bowed out of the amateur game after being part of the winning Great Britain & Ireland team at the 2011 Walker Cup and then made an immediate impact on the professional scene when he won on his third appearance on the European Tour at the 2011 Portugal Masters.

“We are delighted to announce that Tom Lewis has signed a deal to act as a Brand Ambassador for Marriott,” said Alison Ainsworth, Senior Director for Golf Europe.

“He is one of Britain’s brightest rising stars and as such is well-placed to promote the Marriott name wherever he plays.”

“I would like to take this opportunity to thank Marriott for their interest in me,” said Lewis. “I look forward to working with them and to helping raise the company’s profile amongst golfers of different countries.”