In the Bag: Ernie Els

We delve into the BMW International Open champion's bag 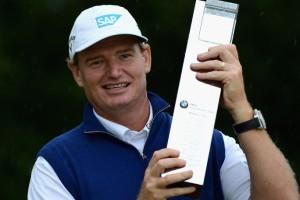 The victory could not have come at a better time for Els, who will now take several weeks off before heading to Muirfield to defend the Open Championship - a course where he first lifted the Claret Jug in 2002.

“It’s been wonderful,” said Els. “I’ve had a great week in Germany. We’ve got to thank BMW obviously for their 25 years of support, I’ve tried a long time to try and win this golf tournament. I really had it going and then I made it tough for myself again.

“It’s great to get my name on this wonderful trophy. Obviously it gives me a lot of confidence, especially heading into The Open. Wire-to-wire you’ve got the pressure, every night you’ve got to sleep on it, guys are chasing you. So this is quite a week for me.”

Starting the day in a tie for the lead, Els flew out the blocks with three birdies in the space of four holes from the fifth but brought his closest rivals Thomas Bjorn and Alexander Levy into the mix when blocking his second to the par-5 11th into the water.

Bjorn all-but surrendered his hopes when making double-bogey at the 14th and Levy bogeyed 15 and 17 to help ease Els' cushion coming home.

A superb drive down the 18th fairway and second into the heart of the green from outside of 240-yards gave Els the comfort of two-putting for birdie and a one-shot victory over Bjorn.

Els ranked first in greens in regulation for the week with his RAZR Muscleback irons with a stunning 89% and fired an average driving distance of 296 yards with his RAZR Fit Xtreme.

Click this link for our Ernie Els swing sequence...