At least one Ryder Cup went ahead...

Yorkshire's version of the great competition won by Europeans 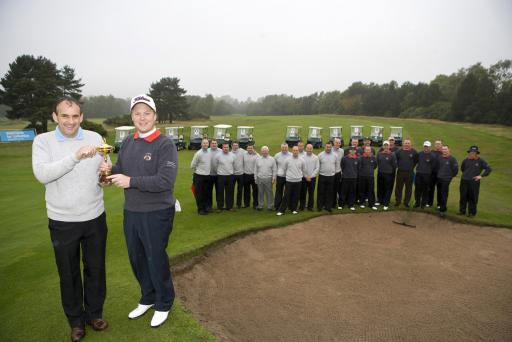 While we can’t offer you Paul the Octopus, pundits could do worse than look at the scorecards of Yorkshire’s version of the Ryder Cup held at Moortown Golf Club - the venue of the UK’s first ever Ryder Cup in 1929.

Weather conditions in Yorkshire were similar to those at Celtic Manor but the wet, grey and bleak skies didn't halt the European team romping to victory with a convincing 17-7 win.

Raising money for Help for Heroes, this charity competition welcomed representatives from the senior United States forces personnel to take on a British Infantry team in a faithful homage to golf’s greatest team event.

“We took this challenge very seriously and there was never any doubt that we would win,” he said.

“Whilst we may have a special relationship with the USA, when it comes to sporting challenges we’re out to beat them.

“One thing that we are united over is the bid to raise as much money as possible for this worthy charity.”

The event, sponsored by Communisis and Banana Kick, was organised by Welcome to Yorkshire to raise money for Help for Heroes and to build awareness of Yorkshire’s fantastic golfing pedigree.

The two teams of 12 players were officiated by members of Moortown Golf Club and followed the Ryder Cup template with players undertaking rounds in singles, foursomes and four ball formats.

If you wish to make a donation to Help for Heroes, you can do so here.