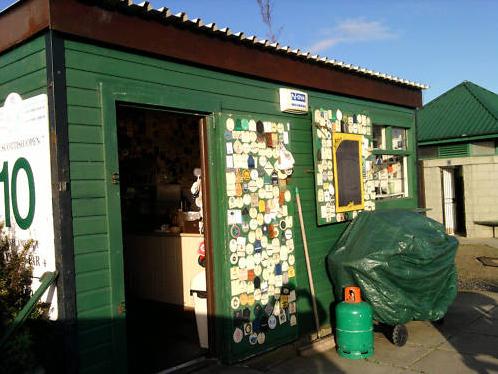 Here’s one for keen collectors of golf memorabilia. Or for those in the market for a garden shed with a difference.

The famous Carnoustie tea hut which has served many of the world’s leading golfers has been put up for sale on eBay.

The wooden hut between, situated behind the tenth green at one of golf’s most famous courses, is being replaced by a more modern structure after more than 60 years of service.

Bruce Wharton, who has run the hut for the past 17 years, wrote in the listing he was sad the Carnoustie Golf Links Management Committee had voted to replace the building.

“In recent times, who will forget the drama of Jean van de Velde at Carnoustie in the 1999 Open, and the superb finish of Padraig Harrington in 2007; such is the mark that Carnoustie has made in the world of golf,” he wrote.

“Situated behind the tenth green of the championship course is a modest wooden building which has made its own mark over the years; through the door of which countless golfing greats, sporting icons, and celebrities, have passed.

“A little bit of character, and quirkiness, will be lost to Carnoustie for all time, a detail that does not escape the notice of many local, and visiting, golfers.

“However, the course’s loss can be your gain as the opportunity exists here to bid for this unique piece of golfing history and heritage.

“The interior has been ‘decorated’ over the years by hundreds (literally) of bag tags from around the world, and they, alone, represent a collector’s delight, as well as being a great attraction to visitors, many of whom spot friends, and acquaintances, amongst them.”

The hut, measuring just 16 by eight feet, is being replaced after the course was warned it needed to upgrade its facilities or risk losing the right to host the Open Championship.