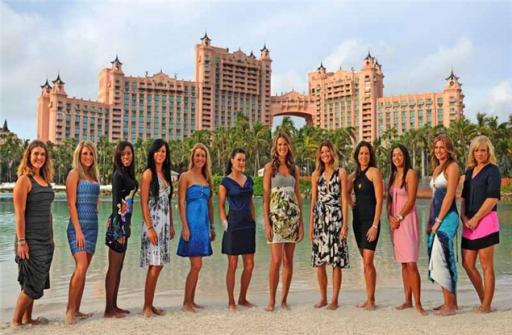 An all-female cast will line up in Golf Channel's popular Big Break reality series for its premiere episode tonight.

Big Break Atlantis will showcase a field of 12 women at different stages of their golf careers. Several are currently playing on the Symetra Tour (LPGA development tour), including Martin Kaymer’s girlfriend Allison Micheletti, while others turned pro in time for the series.

The Big Break show will pit the girls against each other in a variety of challenges that test their physical skills and mental toughness. Yani Tseng will also make a special guest appearance.

During Big Break Atlantis, one contestant will be eliminated each week; with the last player standing awarded her Big Break of a once-in-a-lifetime opportunity to compete in an LPGA Tour event.

The first event will see competitors face off in one of the most popular challenges on the series by the name of Glass Break.

Here's a closer look at some of those taking part...