Ahead of the 2017 BMW PGA, get your juices flowing with 10 of our favourite moments from the event. 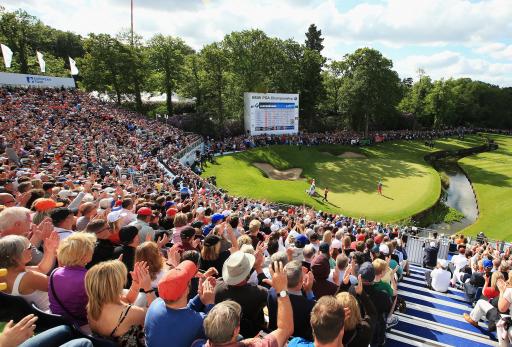 Previous winner Rory McIlroy is unable to compete this week as he battles injury, but it's a relatively strong field that lines up on Wentworth's revamped West Course in 2017, thanks to the competition's inclusion in the European Tour's new Rolex Series.

To whet your appetite, we've delved into the archives and ranked our 10 favourite moments from the European Tour's flagship event.

Angel Cabrera shot a final-round 66 to finish on 15 under par, two shots ahead of Ireland’s Paul McGinley.

It was a case of third time lucky for the Argentine, after he finished runner-up in 2001 and 2004.

“This is a huge victory for me. It’s really the best moment of my life winning the biggest event in Europe after the Open Championship,” Cabrera said.

Italy's Costantino Rocca duelled with Sir Nick Faldo and got the better of the English star.

Faldo was looking to win his fifth PGA Championship but the Italian held him at bay to win his third European Tour event.

Hansen holed an 25-foot putt to force extra holes and then slam-dunked an 18-footer for birdie to dispense of Rose on the first play-off hole.

Jimenez was propelled to his first PGA Championship win after a hole-in-one on the West Course’s fifth.

The Spaniard locked horns with England’s Oliver Wilson in a play-off after both players finished on 11 under, before Jimenez sealed victory on the second extra hole with a birdie on the 18th.

The Surrey native held off a charge from compatriot Ross Fisher on the final day to win the event by a single stroke.

Fisher’s final round of 64 featured eight birdies and no bogeys, meaning Casey needed a birdie on the final hole to avoid a play-off.

He made it hard for himself, after finding the greenside bunker with his second shot, but managed to get up and down for the win, which lifted him to third in the world.

“I've always wanted to get my hands on this trophy - this feels fantastic," he said.

David Howell was the first English winner since Nick Faldo in 1989 after finishing five strokes ahead of Simon Khan.

The 29-year-old had a three-shot lead going into the final day, and a three-under-par 69 was enough for victory and moved him into the world’s top 10.

The win came a week after Howell had withdrawn from the Irish Open because of a long-standing back problem.

"Beware the injured golfer, they say. I always come back strong, it seems,” he said.

Simon Khan shot a sparkling 66 on the final day to overturn a seven-shot deficit, the biggest last day comeback in the event’s history.

A 25-foot putt for birdie gave the world number 471 the win by a single stroke over Luke Donald and Fredrik Andersson Hed.

The 37-year-old only qualified for the event a few days before play began and the triumph came after he was forced to return to Q School the year before.

"This means everything. This tournament is the reason I started playing golf and just being here is special this year,” he said.

Luke Donald beat Lee Westwood in a play-off and replaced his countryman as world number one.

The English golfing giants both finished on six under, before Donald sealed the win on the first extra hole after Westwood found the water in front of the 18th green.

Donald, who was ranked second in the world, only needed to finish above Westwood to top the standings, as long as world number three Martin Kaymer finished outside the top two.

"To come through in these circumstances in one of the biggest tournaments in the world, going head-to-head with Lee is pretty special. It doesn't get much better,” the 33-year-old said.

McIlroy won his first BMW PGA Championship after announcing his split with fiancee Caroline Wozniacki on the eve of the tournament.

The 25-year-old was seven shots behind 54-hole leader Thomas Bjorn but carded a sparkling six-under-par 66 in his final round to win by a single stroke.

McIlroy’s form slumped in 2013, and he was visibly down-trodden following the end of his relationship with the tennis star, but this would prove to be the win that lit the blue touch paper.

"When I was inside the ropes it was a little bit of a release. I was on my own, doing what I do best and it gave me four or five hours of serenity or sanctuary, whatever you call it," said McIlroy.

Alex Noren started the final day seven strokes off the pace, and his closing course-record 10-under 62, highlighted by an eagle at 18, saw him set the clubhouse target and win by two strokes.

“I had not thought of trying to win this morning,” said Noren, who will move into the world’s top 10 this week. “My putting was probably the best it’s ever been and I thought after the birdie on 12: ‘It’s going very well.’ For me it was four days of almost perfect weather and it helped me today.”