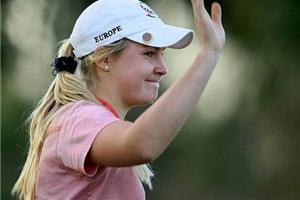 Charley Hull, the Woburn golfer who celebrates her 16th birthday on Tuesday, has spoken for the first time about her decision to accept an invitation to play in the first major on the 2012 LPGA Tour - the Kraft Nabisco, from March 29.

Hull’s decision was against the wishes of the Ladies Golf Union, which had picked her for the Curtis Cup trials at Nairn over the same weekend, and as a result has controversially banned the youngster from the Curtis Cup.

Catriona Matthew called the ban “short sighted” and believes Hull should be allowed to play in the biennial clash between the best amateurs from the US and Great Britain & Ireland.

Hull, rated World No.7 in the amateur rankings, told Northamptonshire Golf Magazine she has moved on from the dispute and is looking forward to taking on the world’s best pros in the ladies equivalent of The Masters at Mission Hills Country Club, California.

“Pulling out of the Curtis Cup trial was a really difficult decision, but everyone has now moved on from that.

“I’m looking forward to playing in the Kraft Nabisco and the LGU is concentrating on winning back the Curtis Cup. I hope we are both successful.”

She adds: “I’m going to have fun, gain a lot of experience, make the most of the atmosphere at the Kraft Nabisco and prepare for the future.

“My game feels good and it’s suited to that type of golf course because I hit it quite high and hit a lot of flop shots. It’s more target golf, so I feel pretty confident out there.”

Hull is one of five amateurs invited to compete in the US event, joining US Curtis Cup player Austin Ernst, Jaye Marie Green and Thai sisters Ariya and Moriya Jutanugarn.

She’s hoping to get a practice round with former British Open winner Karen Stupples in the week before the tournament but revealed that the Rules stipulate amateurs are not allowed to practice on the course in the two days before the first round.

She also revealed that she was looking forward to meeting up with Morgan Pressel, the American star with whom she played in a pre-British Open Pro-Am when Hull was a golf prodigy at just ten years old.

“I don’t remember a lot from the day only that she told me that if the crowd applauded that it meant that I’d hit a good shot, so I should tip my hat to them. Even though I was young, I still wanted to beat her.”

Did she think Pressel would remember her?

“Probably not!” said this precociously talented golfer, who is destined for stardom, whether or not she ever plays in the Curtis Cup.