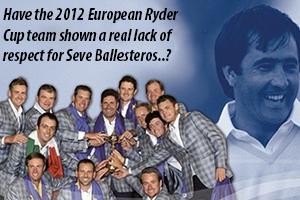 Earlier this week at the Dunhill Links Championship, European Ryder Cup star Paul Lawrie expressed his 'disappointment' at learning eight of his Medinah teammates were snubbing next week's Seve Trophy in France.

The Seve Trophy is played in non-Ryder Cup years and is named after the late Seve Ballesteros - winner of a record 50 European Tour events, including five majors, and five Ryder Cups (four as a player and one as captain) - who died in 2011 from complications of a cancerous brain tumour.

Justin Rose, Rory McIlroy, Graeme McDowell, Luke Donald, Lee Westwood and Ian Poulter have all confirmed they won't be playing for the GB&I side, while Sergio Garcia and Henrik Stenson have declined places in the Continental Europe team.

“I feel pretty much the same,” said Olazabal.

“I know it’s a long season and a very demanding season, especially for the top players who have to travel around the world, playing in the States and different parts of the world. I know it’s difficult, but I feel it would be wonderful if these top players came to play in the event. It would be fantastic.

“Just imagine if Rory and G-Mac, Henrik Stenson and the others were involved. To have them there playing would be outstanding.

“I haven’t spoken to any of the guys. I’ve been in their situation, I know how tough it is, so I’m not going to tell them what to do. They are grown men, they run a very tight schedule and I understand their problems.”

Poulter, as expected, was quick to answer one particular's fan comment over his own withdrawal from the event when tweeting: "Can't play them all I'm afraid. I haven't played Memorial for years, is that disrespectful to Jack Nicklaus?"

Have the European Ryder Cup stars shown a lack of respect to a late golfing legend?

Click here to read what the Golfmagic staff make of it...