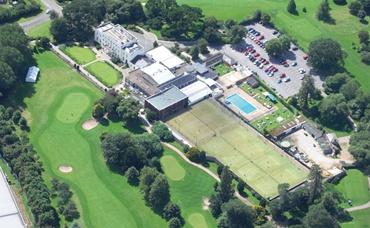 EXETER GOLF AND COUNTRY CLUB is on the brink of closure after property developers objected to its proprosals to put up netting to protect neighbouring houses from stray golf balls.

The Exeter City Council are likely to turn down the 84-year-old Devon golf club's proposal to build 30-metre-high protective screens which would guard the new housing development.

Last year the council were warned of possible problems with the housing being so close to the course and now the agents acting on behalf of Persimmon Homes and Charles Church developers have opposed the plans for protective netting.

Before the planning started, the golf club chairman, Will Gannon, said: "We sent a letter to the council suggesting that any planning permission for the housing should take into account the safety and playability of the golf course as well as the people moving into the new houses.

"Persimmon even regarded the presence of the golf course as a major selling point. They even named some of the house types after such places as St Andrews because they wanted these houses to enjoy the view of the course and Persimmon joined us in commissioning a golf architect to look at the issue.

"Exeter City Council, having granted permission to Persimmon, turned round to us and said it was our responsibility to stop golf balls leaving the course.

"We put in a planning application for netting and not only did Persimmon object, but Exeter [City Council] has said it is minded to turn us down. It puts us in an untenable position and unless permission is granted we will have to consider up and moving.'

"The ramifications for us are enormous, we are the only golf club in the city and one of the most prominent in the South West."

The only option then for the club, which has 5,000 members, 100 staff and an annual turnover of £3m, would be moving two holes and reconfiguring others, costing the club thousands of pounds.

Persimmon said in its letter of objection to the council that the current proposal was an extreme solution while citing it is important to "protect the amenity" of around 1,000 people living in the surrounding houses.

Simon Perks, managing director for Persimmon Homes South West, said: “We had agreed with Exeter City Council a landscaped boundary treatment between our properties and the golf course.

"This followed sensible discussions with Exeter [City Council] and [Exeter] Country Golf Club to catch any golf ball that strayed. The golf club proposed alterations to the golf course that we believe are unnecessary as we have offered a restriction in the title of the properties that would mean any resident would have no claim against the golf club if a ball strayed.”

The closure of golf clubs has been a big issue this summer with Wigan Athletic turning the Charnock Richard Golf Club into training facilities while there have been multiple threats of golf clubs being sold off to business investors.