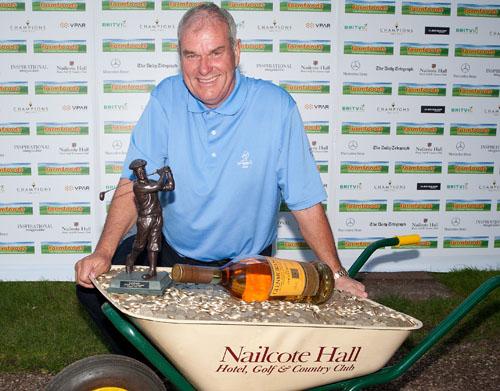 European Tour veteran DJ Russell took the honours at the Farmfoods British Par-3 Championship with back-to-back rounds of 50 for an 8-under total at Nailcote Hall.

A regular on the Seniors Tour and a two-time European Tour champion, Russell used his vast experience to pull two shots clear of fellow Seniors Tour player Gary Wolstenholme and Mark Murphy, who won the Irish Big Break Tournament in 2011.

Russell, who grew up in Birmingham, was three shots behind Lilly at the start of the day. But after dropping shots early on, he finished in style with birdies at the 14th, 15th and 17th to wheel away with a barrowload of coins and coveted trophy.

For four straight days, the Cromwell Course was bathed in glorious sunshine and saw more than 5,000 spectators walk through the gates.

The victory was particularly emotional for Barnes, who was playing in his first professional tournament for 12 years after recovering from rheumatoid arthritis.