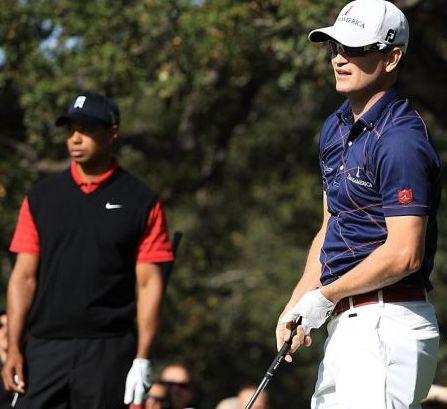 Zach Johnson is hoping his ‘boring’ style gets in the way of his playing partners Tiger Woods and Rory McIlroy during the opening two rounds of the first FedEx Cup Playoffs event at The Barclays.

The 36-year-old, who has won twice on the PGA Tour this season, has been pitted with the heavyweights of world golf based on being ranked fourth in the current FedEx Cup standings after No.2 Jason Dufner withdrew earlier in the week.

Johnson has never played with Woods and McIlroy in the same group before and he’s relishing the opportunity on the challenging Bethpage Black course.

“I guess if I wasn’t playing with them and I was working out in my hotel, I’d probably be watching them on TV, so now I’ve got a first-hand watch,” said the 2007 Masters champion.

“I know the crowd will be pushing them heavily and it’ll be fun. I’m going to enjoy this opportunity - they’re certainly two of the better players that are playing right now.

“I’m just hoping my boring golf kind of gets in the way and that’s really what it boils down to. I like boring golf. That’s kind of what butters my bread, so to speak.”

But it’s not just Johnson’s threeball that the New Yorkers have come to see this week, given a certain Phil Mickelson is in the field.

Although the four-time major champion has never won a PGA Tour event in New York before, he has earned second-place finishes at Bethpage Black in 2002 and 2009, Shinnecock Hills in 2004 and Winged Foot in 2006.

New Yorkers have adopted Mickelson as one of their own in the past, and he is obviously eager to fuel the advantage that gives him again this week.

“I love this area,” said Mickelson.” I love the courses out here. I love the people. I love how knowledgeable they are about all sports. They just get it.

“My kids and my wife get this new energy when they come here. They are in Manhattan right now with some friends.

“This city just brings out a whole different energy level for them. I just love exposing them to all the culture New York has to offer.”

The Barclays is being played at Bethpage for the first time in the tournament’s 45-year-history.

“This is the best thing that has happened to The Barclays because of the type of excitement, the type of support the community gives it at Bethpage,” added Mickelson.

“It is different than any place we’ve been. I just think it elevates the status of the tournament and elevates its credibility.”

Defending champion Dustin Johnson will be out to prove to American Ryder Cup captain Davis Love that he deserves one of four wildcard picks for Medinah next month, as too the likes of Steve Stricker, Jim Furyk, Hunter Mahan, Rickie Fowler, Bo Van Pelt and Brandt Snedeker.

The field comprises the top-125 in the FedEx Cup standings and then cuts to the top-100 in the standings for the ensuing Deutsche Bank Championship.

Did you know?
Starting in 2007, the tournament took on its current name and was played in late August, to lead off the PGA Tour's new playoff system for the FedEx Cup.