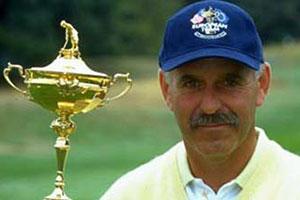 The 1999 Ryder Cup at Brookline still stands out as one of the most controversial clashes between Europe and the United States - rivalling the War on the Shore at Kiawah Island in 1991 and last year's Miracle at Medinah.

There were recriminations and bitter exchanges as Ben Crenshaw's United States team, in their 'postcard' shirts, triumphed over the Europeans led by the enigmatic Mark James.

Golfmagic’s Andy Roberts sat down with the former 1999 European Ryder Cup captain ahead of last week's PGA Seniors Championship at De Vere Mottram Hall to seive out the truth behind his controversial decisions and actions.

In his best-selling book Into the Bear Pit in 2000, James explained how on the eve of the biennial match at Brookline - which ended in a dramatic one-point defeat for the Europeans - he received a good luck letter from six-time major champion Nick Faldo, whom he'd ignored from his captain's picks.

Within the blink of an eye, he tore it up and tossed it in a waste bin. And 14 years on, it appears the wounds have still not healed.

Just for the record, a transcript of the letter read...

To the 1999 Ryder Cup captain Mark James and the European team, the Country Club, Brookline, Massachusetts.

As Tony Jacklin said to me: 'Good luck and play well goes out of the window. Just win'.

I believe you can bring the Ryder Cup back to Europe again where it belongs. I am right behind you and will be supporting the team throughout the event, even though it is from 2000 miles away. My very best wishes to each of you. Above all, enjoy it.

So reading between the lines, was this an outpouring of encouragement from Faldo or a bitter outburst at how he’d not been picked as a wildcard for a team which he’d represented more times than any other European?

As he considered my question - and appreciating I was only 11 years old at the time - James paused, shuffled back in his chair and then stifled a wry smile...

“It was felt by myself and others that he was being disingenuous,” he said.

“We didn’t want to put his letter on the board with all the other good-luck messages.

“Nick sort of screamed and shouted so much in the press about me and who I was picking and stuff, so I just threw it away.”

Prior to the 1999 Ryder Cup, James controversially favoured Andrew Coltart as his second captain’s pick, adding to his first pick Jesper Parnevik, thus leaving out in-form No.11 Robert Karlsson and the experience of both Faldo and two-time Masters champion Bernhard Langer.

In one of the most discussed moves in Ryder Cup history, James then kept Coltart, Jean Van de Velde and Jarmo Sandelin on the bench during all 16 matches during the first two days of play, relegating them to singles action only.

To make matters worse, the trio lost their Sunday matches heavily as the US tied the largest come-from-behind victory in Ryder Cup history with Europe achieving the same feat last year.

“Even if Nick had won his last qualifying event he would have been about 25th on the list, and you just don’t go that low,” he added.

“What he [Faldo] objected to, and why he started a lot of press stuff, was that he asked me at the start of the week what he had to do to make the team.

“I told him, and I was honest, I said look ‘even if you win, I probably won’t pick you’. My mistake was probably telling him the truth.

What did you make of James' actions during the 1999 Ryder Cup? Should he have shown Faldo more respect? Share your thoughts in the forum below or tweet us @Golfmagic