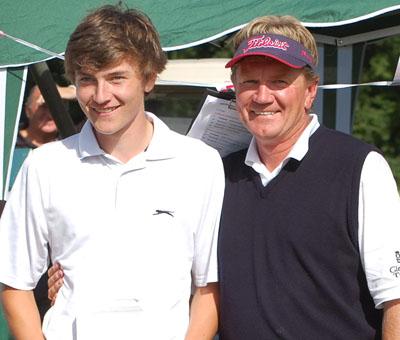 The pair lost out to Graham and James Ruth, of Tavistock Golf Club in Devon and and St Mellion in Cornwall respectively, in the scratch event and John and Paul Odea, of North Wiltshire & Bowood and Rickmansworth, in the handicap section.

“There was pressure out there,” said 47-year-old Broadhurst, six times a winner on the European Tour as well as a member of the European Ryder Cup team that narrowly lost at Kiawah Island in 1991. “I haven’t been in contention for a while so it was good to be put under the cosh for a change.

Needing par at the final hole to reach a playoff in the scratch competition, neither Paul nor his 15-year-old son, a 5-handicapper, managed to secure the necessary points.

“It was good experience for my lad to play in a national championship. I had a few days off and he’s on summer break so we thought we’d give it a go,” added Broadhurst, who is aiming to keep his competitive edge until he qualifies for the Seniors Tour in three years time. Sam also caddied for him when he qualified for The Open at Royal Lytham last month.

The pair were unlucky not build a commanding lead after the first day of the scratch event, scoring 46 betterball points only for the competition to be reduced to only the first 11 counting holes due to thunder storms for the later starters.

In the scratch event the Ruths finally emerged the winners from a dramatic sudden death playoff with Kevin Hinton, professional at Holtye Golf Club, and his three-handicap son Reece, of Nevil Golf Club, after both pairs had secured 64 points in 36 holes, compared to the Broadhurst’s 62.

Ruth Snr, golf director at Brittany Ferries and a three-time Devon County champion said: “I sponsor James on the European Challenge and EuroPro Tour circuit but we don’t get the chance to spend much time together and play golf. To win is a real bonus!”

Meanwhile the O’Deas – 73-year-old 11-handicap John and his 18-handicap son Paul, 32 – recorded a three-point win over Paul and Carl Derbyshire from the Warren & Wallasey GC with an impressive 15-under-par score.

Said O’Dea Snr, a cancer sufferer for the last seven years: “I want to be an example to others of my age; what you can achieve and not to give up.”

His son added: “This is such a fantastic event, every father and son should come and play it.”

Both champions receive an invitation to the European Father & Son final in October at the Lumine Golf Resort, in Spain. Sponsors of the British finals included Glenmuir, GolfBuddy, Motocaddy and ECCO with teams also competing from Germany and Switzerland.