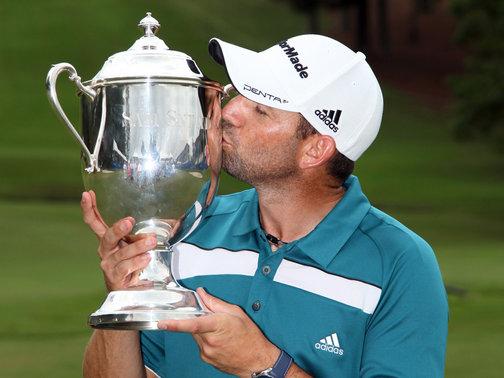 SERGIO GARCIA will look to break a 57-year cycle when he defends the Wyndham Championship at Sedgefield Country Club on Thursday.

The 33-year-old Spaniard, who owns an incredible scoring average of 65.8 from eight rounds at Sedgefield CC, will attempt to become the first player since Sam Snead in 1956 to defend the title.

Although Garcia has notched just one top-25 in his last four events, his rich vein of form on this North Carolina track - which he first set sights on as a tender 18-year-old when finishing third on the Web.com Tour in 1998 - gives him a much-needed boost in confidence.

“Obviously I think that it's a very demanding golf course,” said Garcia, who has chalked up seven top-20 finishes on the PGA Tour this season.

“You have to drive the ball well. I think the greens now after they went to Bermudagrass, it's tougher to hit some of the spots like they were before. They obviously run a lot faster and a bit firmer.

“But hopefully it will be nice to change that bit of history. So the only thing I can do is go out there, hopefully play well like I know I can do and we'll see if that's good enough to repeat here.

“I’ve liked (the course) since '98. For whatever reason I feel very comfortable on it. I like the looks of the course. I like the way it plays. So you know, hopefully I'll be able to do something similar this week.”

But with the likes of Webb Simpson, Brandt Snedeker, Bill Haas and Zach Johnson in the field, Garcia knows only too well the stiff task on his hands.

“I wouldn't say I'm the favourite,” he added.

“I think there's a great bunch of players out here that can win. You know, the tournaments out here nowadays, anybody can pretty much win it. They all have, very good quality, great level.

“So if I play well, I do have a good chance, but if I'm not on my game, then I probably have to do something extra to have a chance.”

When?
Thursday 15 August to Sunday 18 August

Did you know?
The tournament was founded in 1938 as the Greater Greensboro Open.