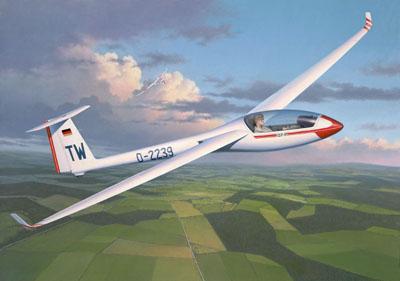 How's this for yet another random loose impediment.

One week on since learning a giant rock plummeted some 1,000 feet onto a Swiss golf course, news is reaching us that a glider was recently forced to land on Stapleford Park near Melton.

It is believed the glider pilot, Luke Dale, lost altitude and was forced to land while taking part in the Midland Regionals event series, which was staged throughout last week from The Gliding Centre at Husbands Bosworth in south Leicestershire.

The golf club’s PGA pro Rich Alderson used a golf buggy to retrieve Mr Dale and his co-pilot Jon Ravenscroft from the course.

“I was in the clubhouse when I got a call from one of the members on the course,” Mr Alderson told Melton Times.

“They were playing the third hole and saw the glider come in to land on the 16th fairway, which runs parallel. I went out on a buggy and picked up the pilot and his co-pilot and brought them back to the clubhouse where they waited for a couple of hours for their support team to arrive.”

The glider landed safely on the course, well away from the luxury hotel and spa which has hosted many top celebrities such as the late Michael Jackson.