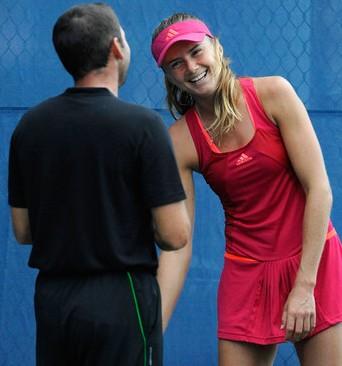 No wonder Sergio Garcia has a smile back on his face.

Two weeks ago, the Spaniard was in danger of missing the 2012 European Ryder Cup side and wondering when he’d break his PGA Tour victory drought lasting four years.

Now all he has to worry about is picking up stray balls for Slovakian tennis ace Daniela Hantuchova.

With victory at the Wyndham Championship two weeks ago punching his ticket to Medinah, several days before tying for third at The Barclays, Garcia has been afforded the luxury of taking the second week of the FedEx Cup Playoffs off to watch the US Open at Flushing Meadows.

Although Garcia spent most of his time on the practice court assisting his good friend, the duo exchanged forehands and backhands with Garcia flashing a sweet topspin forehand that he no doubt groomed on the red clay courts of Spain.

Hantuchova lost her US Open singles match on Monday to fellow Russian Anastasia Pavlyuchenkova but she is still in the mixed doubles event.

Talking of mixed doubles, how about Wozniclroy vs Garcuchova? Or something...