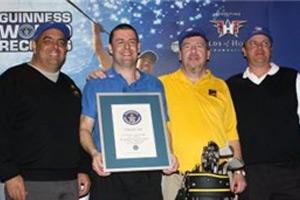 How many golf balls do you record you hit in an hour on the range? A couple of 45-ball buckets maybe? Even hitting 120 or 130 would mean a steady one ball every 30 seconds - itself quite a feat.

Multiply that by a 12-hour period and you're talking over 1,500 balls - and the stamina needed to keep it up would test even the fittest of athletes.

Imagine then what it took for Nigel Mangan from US hybrid-makers Piranha golf to hit 7,721 golf balls in setting a new Guinness World Record at this week's PGA Merchandise Trade Show demo day in Orlando Florida.

Using the Egan’s Golf Centre's training system that delivers a ball to a tee automatically every 1.5 seconds, Mangan of Piranha Golf easily eclipsed the previous world record of 7,350 balls hit by a single person in a 12-hour period.

He started firing practice balls at 6 a.m. and took only a few short breaks until 6 p.m. on his way to setting the new record and raising $5,000 for the Folds of Honor Foundation, which provides scholarships to families of American soldiers killed or wounded in Iraq and Afghanistan.

"It sounds fairly simple, but you wouldn’t believe how tired you get trying something this, " said Piranha Golf president Steve Collins, after Mangan had already hit more than 5,000 balls by noon.
"It was a tremendous way to support the Folds Foundation and have a bit of fun doing it. It is a wonderful charity."

"It’s beautiful weather and this is a great opportunity to put clubs in your hands, hit them, and see the ball-flight characteristics. In Michigan, when the reps come by, we often aren’t able to hit the clubs, so we’re hitting them for the first time today," said Robert Pales, PGA Professional and owner of Sauganash Golf Club in Three Rivers, Mich.

"The beauty of this Demo Day is it’s the largest you’ll find anywhere, and you can compare products of all types," noted Fred Auletta, PGA Professional at Dorset Field Club in Dorset, Vt., who was taking advantage of various manufacturers’ ball and clubfitting programs at the Outdoor Demo Day. "If you can’t find what you’re looking for here, you won’t find it anywhere."

PGA Professionals, buyers and golf-shop leaders lined up to take advantage of ball- and club-fitting bays at Callaway, Bridgestone, Titleist, Cobra, Ping, Wilson, Nike and many other hitting areas.

"Everyone talks about technology, but new technology without performance makes no sense, so we used the Demo Day to let PGA Prosexperience the performance characteristics of our new equipment, including the i15 and G15 line," said Ping's Pete Samuels.

"We’re also demonstrating that fitting means business. When you fit a golfer with precisely the equipment that fits his or her game, they become loyal to the pro who fits them and in turn drives business to the person who fits them."